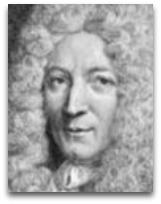 In existographies, Etienne Geoffroy (1672-1731) (IQ:180|#170) (CR:73) was a French physician and chemist noted for the construction of the world's first affinity table, 1718. [1] This is often considered to have been the seed of the chemical revolution. [2] He was stimulated to make his affinity table during a translation into French of a later edition English physicist Isaac Newton's Opticks, particularly in reference to "Query 31". [3]

Human chemistry
In the decades to follow Geoffroy's table, many larger, more elaborate affinity tables were made by other chemists The largest was Swedish chemist Torbern Bergman's 1775 table containing 55-rows and 50 columns of chemical species as found in his textbook A Dissertation on Elective Attractions. [4] In 1809, German polymath Johann von Goethe published his Elective Affinities in which he used Bergman's textbook, and its implicit theory of elective affinity reactions between chemical species, to outline the first-ever human chemistry theory in which work interactions, human friendships, marriage, and love affairs were governed by the laws of affinity just as is the case between small chemical species. [5]

Quotes | On
The following are quotes on Geoffroy:

“The suggestion by Mayow and by Newton, that the phenomena of chemical combination depend upon peculiar attractions, which exist between the minute particles of different bodies, ought perhaps to be regarded as the first successful attempt to lay the foundation of chemistry as a science, and to distinguish it from the other branches of natural philosophy. The attention given to chemistry by some of the more distinguished members of the Academy of Sciences at Paris, the delivery of lectures on this subject in the French language by the elder Lemery; the curious experiments of Homberg on phosphorus, metals and salts; the discovery of the remarkable effects produced upon various bodies by the burning glass; and the ingenious method conceived by Geoffroy of framing tables, which should exhibit the relative degrees of chemical affinity between different substances,—had all contributed to render the pursuits of chemistry more generally popular in France than they appear to have been at the same period in any other country of Europe.”