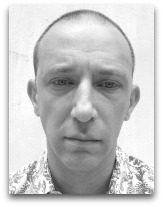 Overview
In 2015, Haspel, in his blog “Alpha Theory”, in an attempt to derive an ethics, devoid of vitalism, anthropocentrism, which goes beyond “moral intuition”, Plato, Kant, and Nietzsche’s will to power, utilitarianism, G.E. Moore’s naturalistic fallacy, i.e. that the way we do behave has nothing to do with should behave, and the ideas of Peter Singer, by postulating a system of ethics that applies to a hypothetical cube of space, which he calls “Eustace”, floating around the universe, loosely depicted as follows: [1]

Haspel defines this hypothetical Eustace “system” as follows: “will assume that at least something in the way of atomic state change is going on; particles will dart in and out of our little cube of space”, in other words, thermodynamically speaking, his system is open. He then correctly states that the first and second law will apply to the governance of this system.

Skipping forward, Haspel then jumps to the conclusion that “useful for describing Eustace is the Gibbs-Boltzmann equation for free energy”, or:

Technically, here to clarify, this version of the Gibbs function, is the isothermal isobaric thermodynamic potential, i.e. the potential for constant temperature, constant pressure systems, which account for most earth-surface type reactions. Haspel seems, correctly, to be describing an isochoric system, i.e. constant volume system, with an open boundary. Pressure and temperature of a volumetric system floating about space, would likely change greatly, e.g. floating near stars and black holes, etc. In any event, his derivation, is meant, supposedly, as a laymanized exercised, as would seem to be the case.

Whatever the case, in a few incoherent and confused steps, Haspel produces the following equation:


and that alpha is “the rate at which the free energy in a system is directed toward coherence, rather than dissipation and is the measure of the stability of a system”. He concludes with the idea that “over time, via Bernoulli trials, complexity emerges from the ooze”.

After this, the derivation mostly goes more off the rails, e.g. he cites information theory, chance models (compare: anti-chance), far-from-equilibrium, Maxwell’s demon, and other erroneous models, but he does interestingly suggest the idea that his alpha is a “universal maximization function” and that “all living things maximize alpha”. Here, of course, we broach the abioism discussion.

To say the least, sidelining all his derivation and citation problems, at least we see Haspel, broaching the problem in the general correct direction, such as has been done in better form by those including: Harold Blum, Bruce Lindsay, Norman Dolloff, Mark Janes, and Jacob Leachman, i.e. a big picture view of things, e.g. ethics, in the great chain of being stylized view of things.