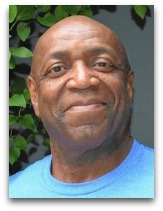 In existographies, Aaron Freeman (1956-) (CR:6) is an American physicist, writer, broadcast journalist, and standup comedian, noted for his Jun 2005 NPR talk “Eulogy from a Physicist” and followup May 2005 essay “My Inner Particle” both of which are ruminations of a "physicist mindset" in respect to what happens to a person when they cease to exist, from the point of view of thermodynamics, particle physics, and quantum mechanics, both reflectively prompted into existence following the recent passing of his father and sister.

In Jun 2005, Freeman, on NPR’s “All Things Considered”, stated the following, in what has come to be known as a “Eulogy from a Physicist”: [1]

And at one point you'd hope that the physicist would step down from the pulpit and walk to your brokenhearted spouse there in the pew and tell him that all the photons that ever bounced off your face, all the particles whose paths were interrupted by your smile, by the touch of your hair, hundreds of trillions of particles, have raced off like children, their ways forever changed by you. And as your widow rocks in the arms of a loving family, may the physicist let her know that all the photons that bounced from you were gathered in the particle detectors that are her eyes, that those photons created within her constellations of electromagnetically charged neurons whose energy will go on forever.

And the physicist will remind the congregation of how much of all our energy is given off as heat. There may be a few fanning themselves with their programs as he says it. And he will tell them that the warmth that flowed through you in life is still here, still part of all that we are, even as we who mourn continue the heat of our own lives.

And you'll want the physicist to explain to those who loved you that they need not have faith; indeed, they should not have faith. Let them know that they can measure, that scientists have measured precisely the conservation of energy and found it accurate, verifiable and consistent across space and time. You can hope your family will examine the evidence and satisfy themselves that the science is sound and that they'll be comforted to know your energy's still around. According to the law of the conservation of energy, not a bit of you is gone; you're just less orderly. Amen.”

My Inner Particle
In May 2005, Freeman published “My Inner Particle”, a reflection of his thoughts on the recent passing of his father and sister, from the point of view of knowledge of the universe, as he sees things as a physicist, using a mixture of the human particle and human wave view of things and the standard model: [2]

“A lot of us physics groupies look to quantum physics as the coolest theory. We believe the physicists who say classical ideas dont cut it when you go nuclear. We get that quantum stuff is so weird the only way you can convince anyone you've really studied it is to endlessly repeat, "I dont know." We, the civilians, accept that a rock is really a cloud composed mostly of empty space and sprinkles of tiny particles.

But what exactly are we supposed to do with the knowledge that everything we know from everyday life is different at the subatomic level? How should evidence of extra six or seven dimensions inform our days? Where in my head and worldview am I supposed to put antimatter?

I want to get in touch with my inner particle and let it point the way.

Particle logic--mysterious, counterintuitive, seemingly insane--pretty much describes life as I live it. And since we are so mind-numbingly small compared to the rest of the universe it makes sense to me to think of individuals as particles [see: human particle].

I want to reason like an electron, to be all over any task from every direction at once. I want to philosophize like a meson, yin and yang, opposites contained in a unified whole. I want to dream like a neutrino, limitless, unstoppable.

As individuals we display a kind of wave-particle duality [see: double slit experiment] While the positions of our bodies are measurable with a high degree of accuracy at any given time our images--audio, video and photographic--spread out around the world via the Internet, existing everywhere at once. For millions of people appearing on TV, broadcast television images spread out, wave-like, across the galaxy in all directions at the speed of light.

Like quarks we are attracted to one another by a strong force: love. We are kept within our social shells [see: human molecular orbital theory] by weaker but still potent bonds of commerce and culture. Geography [see: social gravitation] attracts us, like gravity, in ways that are destiny-producing across the vastness of time. Civilizations reared amid bountiful and fertile soil are destined for one kind of history. Peoples arising on land that happens to contain oil will chase another fate. But like gravity acting on a gluon, the effect of geography on individuals is difficult to measure [see: social physics school].

Race [see: racial thermodynamics] is an artificial and misleading social construct. My skin is not actually black nor is my wife's genuinely white. Physics might help us categorize populations more usefully. Maybe wed be well served by a Standard Model of Particle Humans. Top humans, for example, are the leaders of the industrial west. Theyre certainly massive in terms of their ability to warp global resources. Tops are produced by powerful collisions and often decay quickly. Bottom humans would be the other ninety-nine percent of us.

Charm humans include athletes, politicians, performers--folks who make us believe. The strange ones are artists, academics and scientists--those who sit alone pursuing queer gods.

Folks in uniforms and guns certainly are the equivalent of force carriers. Though we may have to check whether some cops are more bozos than bosons.

My late father and sister have gone off to join our ancestors among the neutrinos. Its unlikely that I will see them again in the visible particle world.

We humans are perhaps most particle-like in our slavish submission to the principle of uncertainty. Everyone whos ever sat down to write a letter knows you can form in your mind precisely what you want to say, yet still be surprised by what you ultimately write. Uncertainty is what makes every day an adventure.

Perhaps my inner particle will grant insights into all manner of human phenomena. Maybe Ill be a faster cyclist by embracing my photon self. Maybe I'll start to see the womb as a human Higgs field wherein eggs, like particles, acquire mass.

Then again, if the string theorists are right, maybe all Ill get from my inner particle are some good vibrations.”

Some of this discussion, to note, is similar to that presented in Vladimir Cruz’s 2010 film Afinidades, e.g. both refer to love in terms of gluons and the strong force.

Beliefs
The following are statements on Freeman's beliefs:

“Fifteen years ago, I was a Catholic atheist. I didn't believe in god but was afraid of her anyway. There were no Jews in my family, and my significant other was a Scotch-Irish agnostic. Had she cared enough, she would have evangelized atheism. As a comedian always looking for jokes, I started reading the Bible. I was struck by how many Jews were in that book, and so I got curious about Judaism. I really became a Jew to confuse radical black Muslims: "He's my brother--my enemy--my brother--my enemy--Arrrgh!" I have friends who say if you cannot prove you are descended from freed African slaves then there's no need for further discussion of your Jewishness. To them there are no white Jews. I don't go that far. But Moses, Aaron, Miriam and company were Africans. They were born in Africa--as were their parents and their parents before them and theirs. I make jokes about my conversion because, well, I'm a comedian. But aside from that, the truth about my conversion is pretty boring. I am a Jew for the same reason that I am a Negro: I have no choice; I just am.”

“I believe in Nike, goddess of victory; Anapurna, goddess of food; Sophia, of wisdom, Shango, of the sky; and absolutely in Dionysus, of wine making and theater!”

— Aaron Freeman (2013), response to query ‘do you believe in god’, asked by Deborah Mitchell, who devoted a chapter of her book Growing Up Godless (2014) to his eulogy; he deflected the query by giving comedic like agnostic or polite atheist's creed