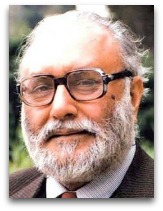 Overview
In 1956, Salam, in his draft article “On Parity Conservation and Neutrino Mass” (Ѻ), questioned “parity conservation”; he then sent the draft article to Wolfgang Pauli, who dismissed it; after which, in 1957, Tsung-Dao Lee and Chen-Ning Yang suggested experiments that showed that the weak interaction of radioactive decay could indeed violate parity conservation. [1]

In 1979, Salam shared the Nobel Prize in Physics with Sheldon Glashow and Steven Weinberg for his contribution to electroweak unification theory.

Quotes | On
The following are quotes on Salam:

“Dirac was regarded by Salam as the ‘supreme physicist’.”

Quotes | By
The following are quotes by Salam:

“I am a theoretical physicist, and we are engaged on the following problem: we would like to understand the entire complexity of inanimate matter in terms of as few fundamental concepts as possible.The task which we are engaged on is to try to reduce this seeming complexity to something simple and elementary. But to do this, what we will most certainly need is a complete break from the past and a sort of new and audacious idea of the type which Einstein has had in the beginning of the century.”

“Once Dirac asked me whether I thought geometrically or algebraically. I said I did not know what he meant, and could he tell me himself how he thought. He said his thinking was geometrical. I was taken aback by his because Dirac, with his transformation theory, represented for my generation the algebraic movement in physics par excellence. So, I said: “I still don’t understand.” He said, “I will ask you a question. How do you picture the de Sitter space?” I said, “I write down the metric and then think about the structure of the terms in the expression.” He said, “Precisely as I thought. You think algebraically......I picture, without effort, the de Sitter space as a four-dimensional surface in a five-dimensional space.”