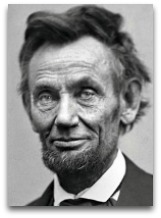 In existographies, Abraham Lincoln (1809-1865) (IQ:175|#205) (CR:25) was an American president, voted the second smartest president, behind Thomas Jefferson, by colloquial vote (2013), noted for using Euclidean logic based reasoning and arguments in his legal cases, when a lawyer, and as president, supposedly, in pushing and arguing for the passing of the 13th amendment, i.e. the legal end of slavery (see also: energy slave) in America. [1]

Religion
Lincoln, as a child, who grew up in the home of devout Separate Baptist parents, but never embraced his father’s religion. In 1831 to 1837, Lincoln, aged 22 to 28, on his own in New Salem (Ѻ), became a voracious reader, and was imbibed deeply of the anti-Christian writings of Thomas Paine and Constantin Volney. He became a full-blown skeptic and even wrote a treatise denying essential Christian tenets like the inspiration of Scripture and the ­divinity of Christ. [7]

“The Bible is not my book nor Christianity my profession. I could never give assent to the long, complicated statements of Christian dogma.”

“My earlier views of the unsoundness of the Christian scheme of salvation and the human origin of the scriptures have become clearer and stronger with advancing years, and I see no reason for thinking I shall ever change them.”

Euclid
In 1850 to 1859, Lincoln, while working as a travelling lawyer, of the Illinois 8th Judicial Circuit (Ѻ), was said to have spent most of his spare time reading to remedy his “want of education” that he regretted, supposedly, all his days:

During his nights and weekends on the circuit, according to existographer Doris Goodwin (2005), Lincoln taught himself geomemtry, carefully working out propositions and theorems until he could proudly claim: “I nearly mastered the six-books of Euclid.” The following are other noted Lincoln-Euclid quotes:

“If you have ever studied geometry, you remember that by a course of reasoning, Euclid proves that all the angles in a triangle are equal to two right angles. Euclid has shown you how to work it out. Now, if you undertake to disprove that proposition, and to show that it is erroneous, would you prove it to be false by calling Euclid a liar?”

“There are two ways of establishing a proposition. One is by trying to demonstrate it upon reason, and the other is, to show that great men in former times have thought so and so, and thus to pass it by the weight of pure authority. Now, if Judge Douglas will demonstrate somehow that this is popular sovereignty,—the right of one man to make a slave of another, without any right in that other, or anyone else to object,—demonstrate it as Euclid demonstrated propositions,—there is no objection. But when he comes forward, seeking to carry a principle by bringing it to the authority of men who themselves utterly repudiate that principle, I ask that he shall not be permitted to do it.”

“In the course of my law reading I constantly came upon the word “demonstrate”. I thought at first that I understood its meaning, but soon became satisfied that I did not. I said to myself, What do I do when I demonstrate more than when I reason or prove? How does demonstration differ from any other proof? I consulted Webster’s Dictionary. They told of ‘certain proof,’ ‘proof beyond the possibility of doubt’; but I could form no idea of what sort of proof that was. I thought a great many things were proved beyond the possibility of doubt, without recourse to any such extraordinary process of reasoning as I understood demonstration to be. I consulted all the dictionaries and books of reference I could find, but with no better results. You might as well have defined blue to a blind man. At last I said,- Lincoln, you never can make a lawyer if you do not understand what demonstrate means; and I left my situation in Springfield, went home to my father’s house, and stayed there till I could give any proposition in the six books of Euclid at sight. I then found out what demonstrate means, and went back to my law studies.”

“Lincoln studied and nearly mastered the six-books of Euclid (geometry) since he was a member of Congress. He began a course of rigid mental discipline with the intent to improve his faculties, especially his powers of logic and language. Hence his fondness for Euclid, which he carried with him on the circuit till he could demonstrate with ease all the propositions in the six books; often studying far into the night, with a candle near his pillow, while his fellow-lawyers, half a dozen in a room, filled the air with interminable snoring.”

Euclid | Slavery
In Jan 1865, as portrayed in the 2012 film Lincoln, a famous "Euclid scene" occurs, shown adjacent, a reenactment of the decisive peace negotiators (Ѻ) response telegraphy, Lincoln enters into a discussion with a telegraph operator (right) and an engineer, during which he digresses on his reading of Euclid, specifically common notion (axiom) #1 of book 1 of Elements: (Ѻ)

which, supposedly, as the scene depicts, Lincoln employed, in the turnings of his mind, in the decisive moment of deciding on whether or not to allow the confederate peace negotiators into the capital of Washington (to negotiate for a peace settlement), the result of which, based supposedly on Euclid's first axiom, he "chooses" to alter the telegraph message, so to keep the peace negotiators at bay, thereby prolonging the war, until he can get the thirteenth amendment passed. In his mind, as the film portrays, Lincoln uses Euclid as a logic proof that slavery is wrong; the film dialogue of which is as follows: [3]

Lincoln: Euclid's first common notion is this: "Things which are equal to the same thing are equal to each other."

Scene: Homer doesn't get it; neither does Sam.

Lincoln: That's a rule of mathematical reasoning. It's true because it works; has done and always will do. In his book, Euclid says this is "self-evident."

Lincoln: D'you see? There it is, even in that two-thousand year old book of mechanical law: it is a self-evident truth that things which are equal to the same thing are equal to each other. We begin with equality. That's the origin, isn't it? That balance, that's fairness, that's justice.

On this film depicted logic, Lincoln finagled the passage of the 13th amendment, to the US Constitution, which reads as follows:

Section 1. Neither slavery nor involuntary servitude, except as a punishment for crime whereof the party shall have been duly convicted, shall exist within the United States, or any place subject to their jurisdiction. Section 2. Congress shall have power to enforce this article by appropriate legislation.

Anecdote | Squaring the circle
In one incident, as reported by William Herndon (Ѻ), one of Lincoln’s law partners and later existographer, Herndon walked in on Lincoln at the tail end of a two-day attempt to square the circle:

Herndon (reflection): “I say Lincoln so deeply absorbed in study he scarcely looked up when I entered. He was surrounded by a quantity of blank paper, large heavy sheets, a compass, a ruler, numerous pencils, several bottles of ink of various colors, and a profusion of stationery. He was apparently struggling with a calculation of some magnitude, for scattered about were sheet after sheet of paper covered with an unusual array of figures.”

Herndon: (speaking): “What are you doing?”

Lincoln: “I am trying to solve the difficult problem of squaring the circle. I have devoted the better part of two days, almost to the point of exhaustion.”

Education
Lincoln, as a young man, read Thomas Paine’s The Age of Reason and Constantin Volney’s The Ruins, supposedly the American edition, the first 25 chapters of which translated by Thomas Jefferson. [8]

Lincoln, while on the travelling circuit, studied geometry, astronomy, political economy, and philosophy. [2]

Quotes | On
The following are quotes on Lincoln:

“Much of Lincoln’s unhappiness, the melancholy that ‘dripped from him as he walked’, was due to his want of religious faith. When the black fit was on him, he suffered as much mental misery as Bunyan or Cowper in the deepest anguish of their conflicts with the evil one.”

“Stand with anybody that stands RIGHT. Stand with him while he is right and PART with him when he goes wrong.”

“Nearly all men can stand adversity, but if you want to test a man’s character, give him power.”

“In great contests each party claims to act in accordance with the will of god. Both may be, and one must be, wrong. God cannot be for and against the same thing at the same time.”

“It is best not to swap horses while crossing the river.”