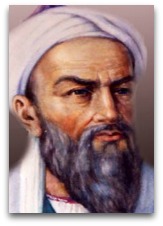 Physics
The following statement Al-Biruni, supposedly, is a forerunner to Newton’s first law of motion: [4]

“All elements converge on the center of the earth, but the heavier precedes the lighter.”

Al-Biruni also, supposedly, was one of the first to give a statement of specific gravity. [4]

Earth
Al-Biruni used the measurements of angles of mountains, trigonometry, and algebra methods to calculate the size of the earth as a sphere; somewhat as illustrated below (adjacent): [1]

Golden age | Islamic scientists
The four big scientific figures in Islam’s golden age, according to Algerian-born astrophysicist Nidhal Guessoum (2010), are: al-Khwarizmi, inventor of algebra and coiner of “algorithm”, Alhazen (Ibn al-Haytham), Avicenna (Ibn Sina), and al-Biruni, who exchanged many letters with the former. [3]

Quotes | On
The following are quotes on Biruni:

“Biruni, a Persian by birth, a rationalist in disposition, this contemporary of Avicenna and Alhazen not only studied history, philosophy, and geography in depth, but wrote one of the most comprehensive of Muslim astronomical treatises, the Qanun Al-Masu'di.”

“The difference between you and me is that you’re a philosopher and I’m a [mathematical] scientist.”