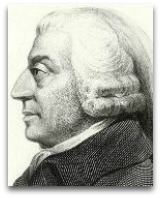 In existographies, Adam Smith (1723-1790) (IQ:170|#324) (Cattell 1000:318) [RGM:80|1,500+] (GEE:#) (CR:56) was a Scottish social philosopher and political economist noted, in human physics, for his 1759 Theory of Moral Sentiments—the first chapter of which described as "striking" by Charles Darwin (Descent of Man, 1871)—a book conceived as a prelude to his Inquiry into the Nature and Causes of the Wealth of Nations (1776), in which he describes his "invisible hand" notion, conceives of people as atoms or particles in a system held together by enforced natural justice. 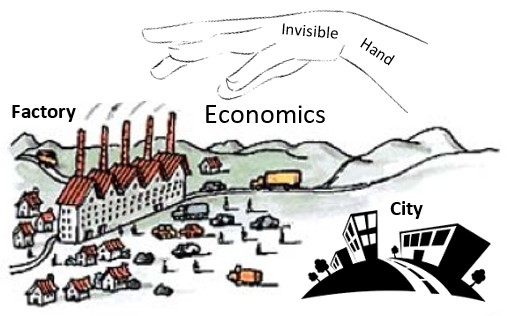 Smith’s formulation of justice, supposedly, is seen as a negative formulation of Vilfredo Pareto's optimality. (Ѻ)
Education
Smith, whose father died (dereacted) before he was born, was supposedly a sickly child, who at the age of 3 was kidnapped from his uncle’s porch by gypsylike vagrants known as “tinkers”, albeit later rescued by his uncle. Thereafter, Smith was known as a bookworm with a spectacular memory, who entered the University of Glasgow at age 14, then Oxford University at age 17, then became appointed professor of “moral philosophy” at the University of Glasgow.

In 1764, Smith left Glasgow for London and then to France as he tutored the young Duke of Buccleuch, during the course of which he began to familiarize himself with the new economic ideas of the physiocrats, especially with the work of French physician turned economic theorist Francois Quesnay. Smith, supposedly, agreed with Quesnay in all respects except that whereas Quesnay argued that the source of economic strength or wealth was “land”, Smith reasoned that the source was “labor”. [7]

Humans | Atoms or particles
In his 1759 The Theory of Moral Sentiments, Adams declares that man is an atom or particle of the system and that justice is the main pillar that keeps humans as atoms bound together into a fabric: [6]

“A wise man never complains of the destiny of providence, nor thinks the universe in confusion when he is out of order. He does not look upon himself as a whole, separated and detached from every other part of nature, to be taken care of by itself and for itself: he regards himself in the light in which he imagines the great genius of human nature, and of the world, regards him: he enters, if I may say so, into the sentiments of that divine being, and considers himself as an atom, a particle, of an immense and infinite system, which must and ought to be disposed of according to the conveniency of the whole.”

“Justice, on the contrary, is the main pillar that upholds the whole edifice. If it is removed, the great, the immense fabric of human society, that fabric which to raise and support seems in this world, if I may say so, to have been the peculiar and darling care of nature, must in a moment crumble into atoms. In order to enforce the observation of justice, therefore, nature has implanted in the human breast that consciousness of ill-desert, those terrors of merited punishment which attend upon its violation, as the great safe-guards of the association of mankind, to protect the weak, to curb the violent, and to chastise the guilty.”

This work is said to have formed the basis of Smith's later 1776 Inquiry into the Nature and Causes of the Wealth of Nations.

Invisible hand | human molecules
Smith, in his The Theory of Moral Sentiments, also famously introduced the theory of the invisible hand: [3]

“Led by an invisible hand to promote an end which was no part of his intention, by pursuing his own interest he frequently promotes that of the society more effectually than when he really intends to promote it. I have never known much good done by those who affected to trade for the public good. It is an affectation, indeed, not very common among merchants, and very few words need be employed in dissuading them from it.”

Herein, Smith describes a selfish landlord as being led by an invisible hand to distribute his harvest to those who work for him.

The “invisible hand” model was later said to have been carried over into the social mechanics models of Leon Walras and Vilfredo Pareto, both of which employed human molecule models. This human molecule based invisible hand social mechanics logic thus slowly was carried over into economics. An example of this is the following 1967 usage by Spanish economist Jose Sampedro: [4]

“Initiated by the physiocrats and was finally popularized in Adam Smith’s formula of the invisible hand … making it easy for each man to satisfy his own egoism. Once this idea had become generally accepted capitalism had defeated the attitudes that hindered its early advance. This implies the theoretical negation of the social structure in a radical way since the doctrine of capitalism conceived the economy as a cluster of human molecules related to each other on a purely economic basis.”

Another version of this is found in a 1999 summary of neoclassical economics, by Robert Costanza and Thomas Prugh, who give the following position:

“The welfare of human society is best served by the view of people as ‘human molecules’ who, by pursuing their own interests through the market, inevitably promote the general good. There is little need to consider things from the ecological point of view and embrace the notions of interaction, interdependence, community, and the noneconomic relations people enjoy with each other and with the natural world.”

albeit only to argue that this so-called neoclassical economist position is a questionable viewpoint to adhere, in their view. [5]

Quotes | On
The following are noted quotes on Smith:

“In 1776, Adam Smith published his Wealth of Nations; which, looking at its ultimate results, is probably the most important book that has ever been written, and is certainly the most valuable contribution ever made by a single man towards establishing the principles on which government should be based. In this great work, the old theory of protection as applied to commerce, was destroyed in nearly all its parts; the doctrine of the balance of trade was not only attacked, but its falsehood was demonstrated; and innumerable absurdities, which had been accumulating for ages, were suddenly swept away.”

“Adam Smith inspired belief in the merit of melding the Newtonian physics of the material world with the science of human behavior.”

Quotes | By
The following are quotes by Smith: