In religio-mythology, Adam and Eve, Hebrew for "clay" and "breath", respectively, is a monotheistic transcription and syncretism rewrite of a combination of the Egyptian clay creation myth and the Greek original sin based "soul mate" theory, according to which, instead of the god-goddess pair Khnum-Hathor creating the original two humans by splitting a ball of clay in two, on a divine potter's wheel, thereby splitting their original soul, god creates the first human "Adam" out of clay or the dust of the ground, then forms the first female "Eve" out of one of Adam's ribs, then puts them in the "Garden of Eden" where the commit the "original sin" by eating from the forbidden "tree of knowledge".

Overview
In 2650BC, Egyptian polymath Imhotep, was mentioning the god Khnum, associating him with the Nile food, as described in a third dynasty (2686-2613BC) inscription by King Zoser, on the rocks at Sehel Island, near Elephantine (Khnum's main cult center), wherein a seven-year famine occurred, wherein it was advised that Khnum would let the Nile flood once again if his temple was renovated. Sometime thereafter, in the millennium to follow, Khnum became the god who created humans, out of clay, on his divine potter's wheel, who were animated by the goddess Isis who put spirit, soul, and or breath into the clay figurines, with the power of the ankh, shown below, to bring them into life.

In 600BC, Greek philosophers, including: Thales, Democritus, Pythagoras, Plato, and others, each began to immerse themselves in a study abroad period in Egypt, to learn their philosophy, science, and religio-mythology based theology; wherein, Plato, in particular, learned the Egyptian clay creation myth origin of humans, thereafter incorporating this human origins model into the split human soul mate, as described in his c.380BC Symposium.

In circa 200BC, this general Plato-Imhotep origins of humans model, was reformulated, by the Hebrew scholars, i.e. "Is-Ra-El-ites", into the monotheistic conceptualized story of Adam and Eve, and the the Garden of Eden, shown below, which presently is taught to child throughout the modern world, in Christianity and Islamic faiths, as the origins of humans:

In circa 1700, German polymath Gottfried Leibniz (1646-1716), in his monad theory, argued that the soul and body are eternal, inseparable in companionship, a consequence of which being the following, as summarized by Ernst Haeckel (1899): [3]

“The souls of men have existed in organized bodies in their ancestors from Adam downward, i.e. from the very beginning of things.”

In circa 1770, German physiologist Albrecht Haller (1708-1777), based on the “scatulation theory”, which assumed that the outline of the entire organism, with all its parts, was present in the egg, according to which the ovary of the embryo had to supposed to contain the ova of the following generation (and, these, again, the ova of the next generation; and so on), calculated that god, 6,000-years ago, on the sixth day of creation, packed the germs of 200-billion men into the ovary of Eve (see: Adam and Eve). [3]

Curiously, according to 2014 polls, 56% of Americans, including many atheists, believe that Adam and Eve were real people. [1] 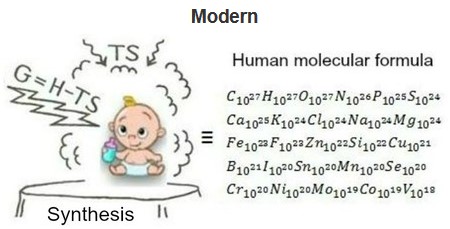 In short, we no longer believe in the origins of humans from Adam and Eve, but rather from atoms and energy, created not by the power of god, but by the power of Gibbs energy; a process that, in some way, is coupled to the waves, tides, and rhythms of the universe.

“The story of Eve and the serpent, and of Noah and his ark, drops to a level with the Arabian Tales, without the merit of being entertaining, and the account of men living to eight and nine hundred years becomes as fabulous as the immortality of the giants of the mythology.”

“It has always been a mystery to me how Adam, Eve, and the serpent were taught the same language. Where did they get it? We know now, that it requires a great number of years to form a language; that it is of exceedingly slow growth. We also know that by language, man conveys to his fellows the impressions made upon him by what he sees, hears, smells and touches. We know that the language of the savage consists of a few sounds, capable of expressing only a few ideas or states of the mind, such as love, desire, fear, hatred, aversion and contempt. Many centuries are required to produce a language capable of expressing complex ideas. It does not seem to me that ideas can be manufactured by a deity and put in the brain of man. These ideas must be the result of observation and experience.”

“God made Adam and Eve. Not Adam and Steve.”

— Anon (2005), letter sent to Tammy Kitzmiller, following 14 Dec 2004 filing of Kitzmiller vs Dover lawsuit on teaching creationism to biology students to explain the origin of life, as an alternative to evolution theory, circa Jan [2]

“Adam and Eve are historical persons created by god in a special formative act, and not from previously existing life-forms.”

— Staff (2014), the new Bryan College belief statement, a reaction to declining Christian values; which professors now have to sign as part of their employment contract (Ѻ)


“[I’m an atheist because] I believe in atoms and energy, not Adam and Eve.”