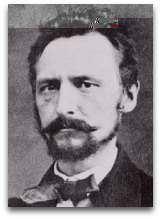 In hmolscience, Adolf Fick (1829-1901) was German physicist-physiologist noted, in religious thermodynamics, for 1869 lecture “The Forces of Nature in their Relationship”, wherein, via citation to Rudolf Clausius, he becomes the first to outline the so-called entropic proof for the existence of god, i.e. of an initial state universe.

Overview
In 1869, Fick, in his lecture “The Forces of Nature in their Relationship”, extrapolated German physicist Rudolf Clausius’ heat death theory of universal end to give what is said to be the first contour of the ‘entropy proof of God’s existence’, to argue that God must exist, because of the second law of thermodynamics, something to the effect that if heat death posits a final state of the universe, that this presupposes an "initial state", which "presupposes a creator", or something along these lines. [1]

Fick was a student of Carl Ludwig and Emil du Bois-Reymond, following which he became proficient in using the “thermodynamic method” in physiology, primarily by using the law of energy conservation to understand physiological processes.

Fink worked in Zurich, Switzerland, from 1852 to 1868, after which he moved to Wurzburg, Germany, where he held the chair of physiology until 1899. (Ѻ) During this period, in 1868, Rudolf Clausius moved from Zurich to Wurzburg, and for a brief period, before Clausius moved to Bonn in 1869, Fink and Clausius were colleagues as professors. Thermodynamics historian Helge Kragh surmises that, although no documented connection exists, that Fink benefitted from discussions with Clausius.

In 1869, Fink, whatever the case, gave a series of six popular lectures on “The Forces of Nature in their Relationship”, which he dedicated to Clausius. Fink stated Clausius’ heat death as follows:

“In the end all forces in the universe must take the form of heat and all temperature differences in the world must be equalized.”

This, following Clausius, precluded any idea of an eternally cyclic universe. A final state also led to the deduction of an initial state; about which Fink stated as follows:

“This final state must be reached after a finite time has elapsed, counted from any arbitrarily chosen initial state which does not include infinite speeds or an infinite scattering of matter in space, i.e. counted from any initial state that can be conceived at all. To put it the other way around, if the world had existed in any eternity the final state would already have been reached.”

This, according to Helge Kragh, is the first clear statement of the entropic creation argument in its limited version, i.e. without speaking of a divinely created world. [3]

Kragh also explains how Franz Brentano, another professor at the University of Wurzburg, also, independent of Fick, supposedly, arrived at the entropic creation argument in 1868 to 1869.

In 1874, German physicist August Kronig, in his 1874 The Existence of God and the Happiness of People, quotes extensively from Fick’s lecture; a rough translation example of which is as follows: [2]

". . . . Fick does this by him showed that the occurrence of so-called final state of entropy as it is clear that something had to give it one that stand outside or above the world. Because - as he thought - since the Entwiöelung the world tends towards a final state of rest, so the world can not have always been a part, as is expected elapsed from that infinitely long past to the present moment an eternity, and therefore that the final state already long ago, would have to be actually already occurred infinitely long. The presence, however, shows that state does not, so the world must have had a beginning, that it may be the cause of their origin does not lie in itself. I consider this the end for new. As an act of creation, of course, presupposes a Creator, and as I Auck about the existence of a creator of a peculiar, differing from that of other researchers of exact view I had appropriated, so I had to interest Fick's very end. First, I wish, however, to obtain certainty as to whether that conclusion really stemmed from Fick, whether or not the anonymous author of the paper had misunderstood abroad **** around. Very, I was pleased when researching this issue, the excellent Fick's popular lectures, entitled "the forces of nature in their relationship" (Würzburg, 1869) meet you."

Religion
Fick was raised in the Protestant faith and known as a pious person, but he had no formal church affiliation. [3]