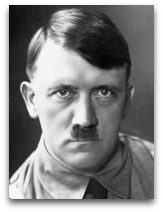 In existographies, Adolf Hitler (1889-1945) (IQ:155|#365) (CR:38) was a Austrian-born German politician who became leader of the German national socialism party, advocates of Nazism, from the German Nationalsozialismus (national socialism), an ideological practice characterized as a form of fascism that incorporates biological racism and antisemitism, a reactionary alternative to internationalist Marxist socialism and capitalism, and who his 1925 Mein Kampf (My Struggle), an autobiographical manifesto, in which he employs a number of emotionally evoking thermal word based analogies and comparisons when discussing the stirrings of human passions.

The 1996 Reenchanted Science: Holism in German Culture from Wilhelm II to Hitler, by Anne Harrington, supposedly, traces theories of gestalt and holism in the work of Goethe to the rise and fall of Nazi holism and mechanism. [4]

“The fundamental motif through all the centuries has been the principle that force and power are the determining factors. All development is struggle. Only force rules. Force is the first law. A struggle has already taken place between original man and his primeval world. Only through struggle, have states and the world become great. If one should ask whether this struggle is gruesome, then the only answer could be: For the weak, yes, for humanity as a whole, no.”

This is sometimes truncated as follows: (Ѻ)

“Through all the centuries force and power are the determining factors. Only force rules. Force is the first law.”

This is fairly cogent. That "force is the first law", however, is close but a bit off: the "first law", technically, is the conservation of energy and or its transformations (in equation form); subsequently, to become energy, force has to be multiplied by a conjugate variable pair, such as distance.

“All cases [of impressions made on people] have to do with an encroachment upon man’s freedom of will. This applies most, of course, to meetings attended by people with a contrary attitude of will, whom must now be won over to a new will. In the morning and even during the day people’s will power seems to struggle with the greatest energy against and attempt to force upon them a strange will and a strange opinion. At night, however, they succumb more easily to the dominating force of a stronger will. For, in truth, every such meeting represents a wrestling bout between two opposing forces.”

See main: Spark of the tongue

The following is a popular thermal word based quote from Hitler's 1925 Mein Kampf: [1]

“All great movements are popular movements. They are the volcanic eruptions of human passions and emotions, stirred into activity by the ruthless goddess of distress or by the torch of the spoken word cast into the midst of the people.”

Here we see Hitler conceptualizing the “spoken word” as something that can act like an activation energy lowering factor to the triggering of a large scale social chemical reaction, the way a match can ignite wood or gasoline in a combustion reaction. Indian-born Pakistani organometallic chemist Mirza Beg outlined a similar speech heat theory, in respect to the period shortly before the riots and manslaughter of Direct Action Day (16 Aug 1946), as follows: [11]

“The speeches made by Hindu extremists generated high heat in their society. Their emotions were set so high as to interact with violent force with the Muslims and this led to widespread riots, killings, arson and looting.”

This, supposedly, was one of the reaction mechanism steps that led to India and Pakistan to becoming independent and self-governing, in the so-called timeline of British India. (Ѻ)

Such thermal word talk here should not be taken lightly nor dismissed as amusing metaphor knowing that, in Hitler's case, by 1934, true to his national socialism philosophy, he had seized complete control of Germany and by 1938 had begun to occupy Austria and parts of Czechoslovakia, by 1939 Poland, by 1940 Denmark, Norway, Holland, Belgium, France, Romania, and Yugoslavia, and by 1941 had begun to invade Russia, with supposed aims to conquer all of Europe. [7]

The autoignition temperature of a substance is the lowest temperature at which it will spontaneously ignite (spontaneous combustion) in a normal atmosphere without an external source of ignition, such as a flame or spark. This temperature is required to supply the activation energy needed for combustion.

Social pressure
The temperature at which a chemical will ignite, to note, decreases as the pressure or oxygen concentration increases. [6] Here, we may see, by extrapolation, via human chemical reaction theory, that the increase in the social pressure in Germany in the early 1930s may have worked to lower the autoignition temperature of the German people, and thus may have ignited on its own without the need of an external spark or flame to cross the activation energy barrier. Hitler, however, seems to have argued that his "spoken words" acted as the activation energy spark or flame, which would imply that the Germans were at or near their flash point, not their autoignition temperature, in July 1934, after the death of President Hindenburg, Hitler declares himself “Fuehrer and Reich Chancellor” over German and abolishes the title of President.

“At the risk of appearing to talk nonsense I tell you that the national socialist movement will go on for 1,000 years!... Don't forget how people laughed at me 15 years ago when I declared that one day I would govern Germany. They laugh now, just as foolishly, when I declare that I shall remain in power!”

Technically, it would seem to be possible that spoken words (sound) could be employed as a means to start a fire they way rubbing of sticks together can create fire in leaves or kindling via friction. Although, it is difficult to find a citation, it has been suggested that as sound transmitted through powerful speakers can create vibration in objects, that such vibrations in materials rubbing against each other could work to start a fire via heated-generated friction, hence validating Hitler's spoken word argument.

Oxidant concentration
In respect to autoignition temperature being lowering when the oxygen concentration increases, in respect to the German people, this extrapolation is more blurry. Combustion, technically, is a sequence of exothermic chemical reactions between a fuel and an oxidant accompanied by the production of heat and conversion of chemical species. The following is a typical combustion reaction between methane (fuel) and oxygen (oxidant):

In comparison to Hitler's spoken words social ignition model, it would seem that the fuel is the German people and the oxidant are the people of the surrounding countries, that when put into contact or mixed can ignite, given the right temperature and possibly the right spark or spoken words.

Passions
In, respect to the volcanic “eruption of the human passions”, the steam engine conceptualized passion-based social theories of American Albert Brisbane comes to mind.

Eugenics
Hitler is often conceptualized, according to colloquial opinion, as one of the most or the most evil persons in history, for his progressive eugenics-based implementations in WWII (1939-1945) during the course of which some 11 million people, of specific race, predominately Jews and other minorities, were systematically killed (dereacted), supposedly based on some type of scientific pretext.

The progressive eugenics-based implementations of Hitler are cited by American chemist Todd Silverstein, in the 2007 Rossini debate, as being one example of the possible future dangers potentially inherent in the future implementation of chemical thermodynamics based socialism: [2]

“The rise of social Darwinism in the late 19th century and eugenics in the early 20th century are just two examples of scientific theories that were mistakenly extended into misguided social policies.”

Related
In thermodynamics trivia, one of Max Planck’s sons was executed in World War II for his part in the assassination attempt on Hitler in 1944. [9]
Quotes | On
The following are related quotes on or about Hitler:

“Hitler’s ideals come mainly from Nietzsche, in whom there is every evidence of complete sincerity.”

“The facts of history are evolved from definite relations at a definite time and place. Everybody admits that Hitler and the corner grocer in a general way are part of the same order of things as is the remotest inhabitant of the most insignificant south seas island.”

Quotes | By
The following are noted quotes by Hitler:

“All propaganda has to be popular, and has to accommodate itself to the comprehension of the least intelligent of those whom it seeks to reach.”