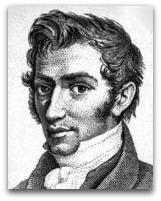 In existographies, Adolphe Quetelet (1796-1874) (IQ:175|#225) (Siegfried 10:4) (SN:25) (CR:62) was a Belgian statistical mathematician, astronomer, and polymath (Ѻ), noted, in hmolscience, for his 1835 Essay on Social Physics, on "social physics", which introduced the subject of the physics of humans or human physics, the attempt to reduce human existence down to physics. [1] The gist of Quetelet's social physics the application of the system of numbers to the study of human patterns and phenomenon.

Scottish physicist James Maxwell was said (Ѻ) to have been introduced to Quetelet, in 1850, via his reading of John Hershel’s review article “Quetelet on Probabilities”; though, to note, there is some debate (Ѻ) (Ѻ) as to how much Maxwell was influenced by Quetelet’s interpretation of the normal distribution. [7]

Nightingale
Italian-born English social theorist Florence Nightingale, a student of Quetelet in some sense, began to employ Quetelet’s social physics work, recasting it into what she called “social or moral economy”, and proposed, particularly in the years after his passing, that Quetelet’s social mechanics be taught at Oxford (see: Oxford Chair of Social Physics), a cause for which she championed, unsuccessfully, for several decades. [6]

Marriage | Statistics
In c.1846, Quetelet published the following table of marriage statistics from the register of marriages at Brussels: [1] 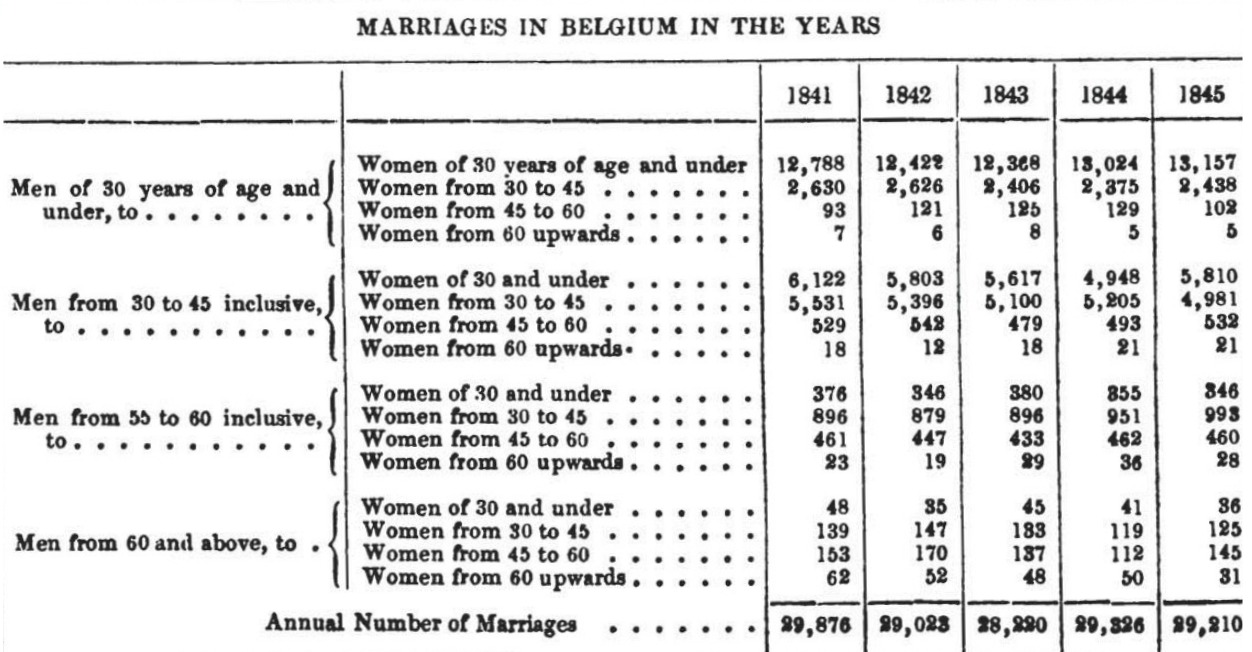 In 1851, Mary Somerville, in her Physical Geography, presented the same table, and in respect to regular occurrence that 5 to 8 men, aged 30 or under, each year, marry women, aged 60 or order, she says the following on free will: [9]

“Certainly no event in a man's life depends more upon his free will than his marriage; yet it appears from the records in Brussels, that nearly the same number of marriages take place every year, in the towns as well as in the country; and, moreover, that the same constancy prevails in each province, though the numbers of the people are so small, that accidental causes might be more likely to affect the general result than when the numbers are larger. In fact, the whole affair passes as if the inhabitants of Belgium had agreed to contract nearly the same number of marriages annually, at each stage of life. Young people may possibly be in some degree under the control of parents, but there can be no restraint on the free will of men of 30 and women of 60 years of age; yet the same number [5-8] of such incongruous marriages do annually take place between men and women at those unsuitable ages—a fact which almost exceeds belief. The day fixed for a wedding is of all things most entirely dependent on the will of the parties, yet even here there is a regularity in the annual recurrence.”

“Forgetfulness as well as free will are under constant laws.”

In 1861, Henry Buckle, in History of Civilization, Volume One (pg. 24), cites Somerville and Quetelet, to argue for determinism in history.

Essay on Social Physics
Quetelet argued for a new science of “social physics”, where, in picking up where the social mathematics of Marquis Condorcet left off, he hoped would be a quantitative science that would allow researchers to count, measure, and predict human actions, and that the “average man”, a kind of perfect physical and moral being, would be the “center of gravity” against which such predictions could be made. [4]

Quetelet’s Essay on Social Physics was originally published in French. The first English translation, supervised by English anatomist and ethnologist Robert Knox, was published in 1842. In the prefaced abstract to this translation, Knox summarizes: [1]

“Quetelet’s 1835 Essay on Social Physics was the first attempt made to apply the art of calculation to the social movements of the human being, and to examine by it his moral anatomy, with the view of detecting the real sources and amount of the evils under which he labors, and, ulteriorly, of remedying them when known.”

The interest in applying the concept of the “normal curve”, derived originally from astronomical measurements associated with observational errors, to questions of social applications, supposedly, first arose in the circle of the French scientists Pierre Laplace and Simeon Poisson. Quetelet being in or associated with this circle, soon thereafter began to carry this passing interest into published application; at first considering individual phenomena such as variation in body measurements, an interest going back to his period as a painter, and social phenomena such as the incidence of crime. In 1831, he issued pamphlets on both these subjects, in the latter of which he enunciated two central principles for the study of mankind at large: [4]

First principle: Causes are proportional to the effects they produce. If a man can lift twice as much as another man, he is twice as strong as that man. Study of man's moral qualities is possible only if this principle can be applied to them also.

Second principle: Exact conclusions are possible only with large numbers. "The greater the number of individuals, the more the influence of the individual will is effaced, being replaced by the series of general facts that depend on the general causes according to which society exists and maintains itself."

The moral regularities, the aggregates of individual choice, which Quetelet himself investigated included age-specific crime rates for men and (separately) for women and are sometimes referred to as the "moral statistics" of Quetelet.

the term ‘average human’ (l'homme moyen), or average man, referring to the demographically average man, the human being with his individual wishes and peculiarities canceled out, in which questions of determinism arose, also supposedly resulted in a reaction of lively debate.

Goethe | Gauss
Quetelet was an associate of thinkers such as Germans mathematician Carl Gauss and polymath Johann Goethe; the latter showing Quetelet special hospitality when he visited Germany in 1829. [4]

Dostoevsky
In 1865, the year of the publication of the first Russian edition of Quetelet, Fyodor Dostoyevsky read Quetelet’s social physics theory and the following year incorporated the logic of social physics into his Crime and Punishment. [2]

Quetelet showed, based on statistical methods, that one could predict the percentage of the population that would murder, turn to prostitution, marry, divorce, commit suicide, etc., and thus in Quetelet’s ‘social physics’, crime is regarded as an unavoidable fact of life. [3] In modern terms, to note, these unavoidable facts are quantified by the Lewis inequality for unnatural processes viewed in the context of thermodynamic coupling.

In Crime and Punishment, the character Raskolnikov is said to apply Quetelet’s social theory to the young women he meets on the street, reasoning that there is no point in helping her, since her fate had already been determined statistically by the laws of social physics. In this example, according to a review by Harold Bloom, Dostoevsky is said to be exemplifying “how the laws of social physics conflict with Christ’s commandment to love one’s neighbor.” [3]

Quotes | By
The following are notable quotes by Quetelet:

“The forces which characterize man are ‘living forces’, in their nature; but do they act in constant manner, and has man, in all epochs, possesses the same quantity—in a word, does there exist anything analogous to the active or living forces in nature? What, moreover, is their destination? Can they influence the progress of the system, or compromise its existence? Or, perhaps, like the internal forces of a system, may then not modify in something its progress, or the condition of its stability? Analogy leads us to believe, that in the social state, we may expect to find in general all the principles of conservation observed in the natural phenomena.”

“In giving to my work the title of social physics, I have had no other aim than to collect, in uniform order, the phenomena affecting men, nearly as physical science brings together the phenomena to the material world.”

“In a given state of society, resting under the influence of certain causes, regular effects are produced, which oscillate, as it were, around a fixed mean, without undergoing any sensible alterations.”