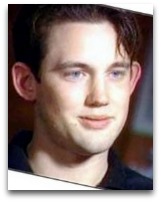 In existographies, Adragon de Mello (1976-), aka “James Gunn” (name change) or "AD", is an American extreme forced prodigy, noted for graduating from college at age 11, in 1988, with a degree in computational mathematics, which set a Guinness Book record, for youngest college graduate.

Overview
In c.1970, Agustin Eastwood De Mello (1929–2003), a karate master, flamenco guitarist, and former weightlifting champion, wrote a science fiction story about “brilliant child who becomes a revered scientist and world leader who leads an intergalactic movement to the great benefit of mankind”, and sent the story to Isaac Asimov to review. [1]

In 1975, Agustin’s second wife Cathy Gunn, became pregnant, at point which Agustin began making her drink a baby genius formula of some sort.

At six weeks, according to his father, Adragon could say “hello”, at age 3, supposedly, he could read and write.

IQ | 400
In 1981, Agustin gave some type of test designed for 20-year-olds to his son, then aged four; from these test results, Agustin calculated that son's IQ was 400 as follows:

Agustin then began telling media that his son has an IQ of 400. This is the highest inflated IQ on record.

Quotes | On
The following are quotes on de Mello:

“The course load crippled AD. Yes, he was extremely gifted, and professors even noted the boy’s photographic memory, but he was coming apart. In astronomy, he scored poorest in the class. On three occasions, he did not complete the course work but the end of the term. As the quarter progressed and blackboard equations gained more parentheses, AD told his father that he couldn't handle the pressure anymore, that he might go crazy.”

“Agustin tested AD's intelligence when the boy turned five. He calculated an IQ of 400, meaning AD might rank as the greatest intellect in history.”