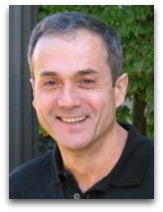 In existographies, Adrian Bejan (1948-) (CR:31) is a Romanian-born American mechanical engineer, of the MIT school of thermodynamics, anti-chance philosopher, noted for his 2007 application of his 1996 thermodynamics-based "constructal theory" in the explanation of social dynamics. [1] His latest publication on this topic is the 2009 collaborative book Constructive Human Dynamics. [2] Bejan's 1988 textbook Advanced Engineering Thermodynamics, was in its third edition in 2006. [3]

Panbioism
In 2016, Bejan, in his The Physics of Life: the Evolution of Everything, on his first page, as cited in this dialogue (Ѻ), says he “naturally disagrees” with Ferris Jabr’s 2014 statement that “nothing is truly alive”. [7] This avowal puts Bejan into the panbioism, as opposed to the abioism, belief category, per his implicit assertion that both water molecules moving in rivers and human molecules moving on roadways are “truly alive” in some sense. [6]

In Sep 1995, Bejan, while attending an international conference on thermodynamics in Nancy, France, whereat he had brought flyers for his seventh book Entropy Generation Minimization, listened to a pre-banquet speech by Ilya Prigogine, who asserted that the various tree-shaped structures in nature, e.g. river basins, river deltas, air passages, or lightning bolts, such as shown below (adjacent(, were aleatoires, i.e. “random” (Ѻ), the results of throwing dice, cosmic coincidences. [5] Bejan commented on this:

“When [Prigogine] made that statement, something clicked, the penny dropped. I knew that Prigogine, and everyone else, was wrong. They weren’t blind; the similarities among these treelike structures are clear to the naked eye. What they couldn’t see was the scientific principle that governs the design of these diverse phenomena. In a flash, I realized that the world was not formed by random accidents, chance, and fate but that behind the dizzying diversity is a seamless stream of predictable patterns.”

“In the sixteen years since, I have shown how a single law of physics shapes the design of all around us. This insight would lead me to challenge many articles of faith held by my scientific colleagues, including the bedrock beliefs that biological creatures like you and me are governed by different principles from the inanimate world of winds and rivers and the engineered world of airplanes, ships, and automobiles. Over time, I would develop a new understanding of evolutionary phenomena and the oneness of nature that would reveal how design emerges WITHOUT an intelligent designer.”

Religion | Physics
In 2012, Bejan, as outlined above, openly had rejecting both the Prigogine god and the god of the ID group.

In 2013, Bejan was featured (Ѻ) in a "Through the Worm Hole" segment, hosted by Morgan Freeman, using his theory to usurp god via sports evolution (Ѻ), which would seem to put him into the implicit atheism category.

In 2016, Bejan, in his The Physics of Life, while not using the term atheism, uses the term god once (pg. 166) to state that “in physical terms, the evolution of urban design and city traffic” are not “god-given”. [6] This seems to be "intelligent design" rejection, but not avowed atheism; possibly closet theism of some sorts, e.g. of the Harold Morowitz or Stuart Kauffman variety? [6]

Social dynamics
In application of his constructal theory, Bejan reasons that society is a live “flow system” (e.g. a river basin, vascularized tissue, city traffic) where each person is like a alveolus in the lung, an eddy in a turbulent river, or a leaf on a branch, and that time’s arrow is pointed in the direction of various sequences of flow configurations that constitute its existence or survival. The evolution of such systems, according to Bejan, actuates according to a new “thermodynamics principle”, conceived by him in 1996, which argues that those configurations that continue to evolve are those that provide easier access to the currents that flow through them. [1]

Quotes | By
The following are quotes by Bejan:

“I think of every thing that ‘moves’, from the atmosphere, to oceanic currents, to these other things that move, these ‘buckets of water’ we call animals, I think of them in the same way. So animal ‘life’, the biosphere, is, with regard to movement, and evolving flow architecture, on the planet, no different that other evolving flow architectures, all flowing more easily to churn over the earth’s crust more effectively.”