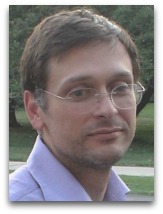 In hmolscience, Adrian Dragulescu (c.1974-) is a Romanian-born American physicist noted for his 1997 to 2002 econophysics work with Russian-born American physicist Victor Yakovenko, at the University of Maryland, on the development of a statistical mechanical model of money, with money defined as energy, economic agents as gas molecules with a certain average money/energy, and an economic systems as one following a Maxwell-Boltzmann distribution like model of economic temperature.

Education
In 1996, Dragulescu completed his BS in physics in Timisoara, Romania.

In 1997, Dragulescu began working as a graduate student under Russian-born American physicist Victor Yakovenko, at the University of Maryland, on problems arising in economics and finance analyzed using concepts and quantitative methods from physics. In 2000, Dragulescu and Yakovenko published their “Statistical Mechanics of Money” (GS=400, 16 Jun 2013), there most widely-cited article, wherein the argue that:

(a) in a closed economic system money is conserved;
(b) money is a type of energy;
(c) each economic agent has a certain amount of average money (or energy);
(d) an “effective temperature” of the economic system can be obtained from this model that will follow the exponential Boltzmann-Gibbs law.

The following is their Boltzmann distribution money model:
(add discussion)

In 2002, Dragulescu finalized his studies by completing his PhD on “Applications of Physics to Economics and Finance: Money, Income, Wealth, and the Stock Market”, under Yakovenko. In 2008 retrospect, Dragulescu stated the following about this educational experience: [3]

“I made complete use of six years to get a PhD from the physics department of University of Maryland, College Park. My advisor was Victor Yakovenko. This was a very happy period of my life. I had the freedom and time to study any subject that interested me. Before that, I studied physics in Timisoara, Romania for five years. It was right after the Communist regime fell so the curriculum became boldly experimental, with a bunch of enthusiastic young lecturers.”

Dragulescu, since 2002, has been a risk analyst, among other positions, at Constellation Energy Group, Baltimore.