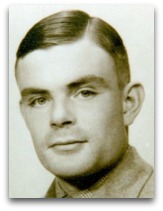 Thinking machines | Theological objection
In 1950, Turing, in his “Computing Machinery and Intelligences”, wherein the so-called “Turing test” originated (similar to the Cartesian automaton problem), sought out consider the question: “can machines think?”, centered around the notion of a modern digital computer, of the Charles Babbage “analytical engine” type, following which Turing lists seven points of objection this proposal, or “opinions opposed to my own”, the first, ironically enough, being the religious objection, stated in full below: [4]

“Thinking is a function of man's immortal soul. God has given an immortal soul to every man and woman, but not to any other animal or to machines. Hence no animal or machine can think.

I am unable to accept any part of this, but will attempt to reply in theological terms. I should find the argument more convincing if animals were classed with men, for there is a greater difference, to my mind, between the typical animate and the inanimate than there is between man and the other animals. The arbitrary character of the orthodox view becomes clearer if we consider how it might appear to a member of some other religious community. How do Christians regard the Muslim view that women have no souls?

But let us leave this point aside and return to the main argument. It appears to me that the argument quoted above implies a serious restriction of the omnipotence of the Almighty. It is admitted that there are certain things that He cannot do such as making one equal to two, but should we not believe that He has freedom to confer a soul on an elephant if He sees fit? We might expect that He would only exercise this power in conjunction with a mutation which provided the elephant with an appropriately improved brain to minister to the needs of this sort.

An argument of exactly similar form may be made for the case of machines. It may seem different because it is more difficult to "swallow." But this really only means that we think it would be less likely that He would consider the circumstances suitable for conferring a soul. The circumstances in question are discussed in the rest of this paper. In attempting to construct such machines we should not be irreverently usurping His power of creating souls, any more than we are in the procreation of children: rather we are, in either case, instruments of His will providing mansions for the souls that He creates.

However, this is mere speculation. I am not very impressed with theological arguments whatever they may be used to support. Such arguments have often been found unsatisfactory in the past. In the time of Galileo it was argued that the texts, "And the sun stood still . . . and hasted not to go down about a whole day" (Joshua x. 13) and "He laid the foundations of the earth, that it should not move at any time" (Psalm cv. 5) were an adequate refutation of the Copernican theory. With our present knowledge such an argument appears futile. When that knowledge was not available it made a quite different impression.”

Chemical morphology
In 1952, Turing, in his “The Chemical Basis of Morphogenesis”, considered a "ring" of identical cells containing various chemical substances, called morphogens, and the patterns result from interactions between these morphogens that diffuse in the medium and enter into chemical reactions with each other. [1] This model is said to be akin or related in some way to a cellular automaton theory, the Neumann automaton theory in particular. [2] English-born Canadian physical chemist Lionel Harrison employed Turing's chemical morphology theory in his 1980s kinetic theory of living pattern theories. [3]

Other
In during WWII, Turing cracked the German ‘Enigma’ cipher; he is known for Turing test of computer intelligence; and the so-called "Turing award" is considered by some to the be the Nobel Prize of computer science.

● Isotopes (Ѻ) by Frederick Aston
● Mathematical Recreations and Essays (Ѻ) by W. W. Rouse Ball
● Alice's Adventures in Wonderland (Ѻ), Game of Logic (Ѻ) and Through The Looking Glass (Ѻ) by Lewis Carroll.
● The Common Sense of the Exact Sciences (Ѻ) by William Clifford
● Space, Time and Gravitation (Ѻ) and The Nature of the Physical World (Ѻ) by Arthur Eddington.
● Sidelights on Relativity (Ѻ) by Albert Einstein
● The Escaping Club (Ѻ) by A. J. Evans
● Contributions to Mental Philosophy (translated and edited by J.D. Morell) (Ѻ) by Immanuel Fichte,
● The New Physics (Ѻ) by Arthur Haas
● Supply and Demand (Ѻ) by Hubert Henderson
● The Stars in their Courses by (Ѻ) James Jeans
● Atoms and Rays (Ѻ) and Phases of Modern Science (Ѻ) by Oliver Lodge.
● Matter and Motion (Ѻ) by James Maxwell
● The Theory of Heat (Ѻ) by Thomas Preston
● A Selection of Photographs of Stars, Star-Clusters & Nebulae (Ѻ) by Isaac Roberts
● Modern Chromatics, with applications to art and industry (Ѻ) by Ogden Rood
● Celestial Objects for Common Telescopes (Ѻ) by Thomas Webb
● The Recent Development of Physical Science by William Whetham
● Science and The Modern World by (Ѻ) Alfred Whitehead
● Sound Waves and their Uses (Ѻ) by Alexander Wood

Quotes | On
The following are statements of tribute and or praise of Turing:

“Turing was a deep thinker rather than a fast thinker. His IQ was therefore not especially high.”

Quotes | By
The following are noted Turing quotes:

“Sometimes it is the people no one imagines anything of who do the things that no one can imagine.”

“Science is a differential equation. Religion is a boundary condition.”