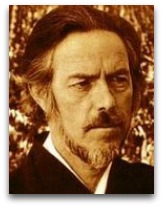 In existographies, Alan Watts (1915-1973) (IQ:160|#340) [RGM:352|1,500+] (Perry 80:71) (CR:23), was an English-born American philosopher noted for a number of book and audio publications in which he advocates a semi-scientific semi-newage one nature mixture of Zen Buddhism, aspects of Christianity, and new physics theories, e.g. cybernetics, process philosophy, etc., much of which amounts to a good deal of circular philosophical talk, albeit semi-interesting nevertheless.

Wiggly forms | Science vs Buddhism
In 1960, Watt, in his "Science and Buddhism", gave the following diagram to give a two-point of view model of science (quantification) and ancient wisdom (description) of something such as the form of a flame dancing above a fire: (V) 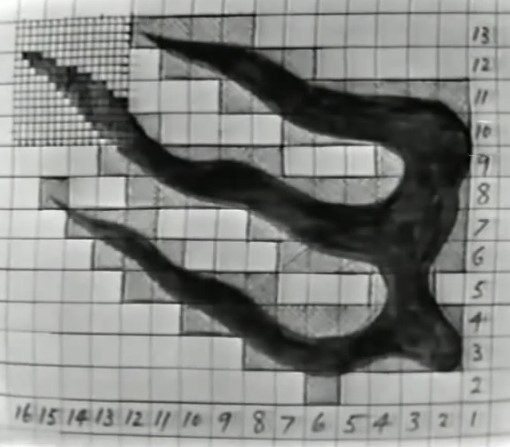 The following (V|13:51) shows Watts explaining how one can see a certain figure as either a bear climbing a tree or a tree with lopped off branches (left), depending on what you were told it was, in the same what that one can conceptualize an eclipse of the sun as either a dragon swallowing the sun, as in primitive cultures (e.g. ancient Egypt), or as the moon obfuscating view of the sun, as modern science explains things:

This is akin to a modern version of Plato's allegory of the cave, in respect to religious beliefs.

Spontaneity
In circa 1969 to 1972, Watt, in his “Work as Play” video talk (Ѻ), a key four minutes of which is shown, in text and in video, discussed spontaneity, work, and love in a pleasing manner:

Watts's comments about spontaneity and the "secret of life" in some ways, is akin to Robert Pirsig's views.

Thermodynamics
In 1970, Watt published Does it Matter? Essays on Man’s Relation to Materiality, his third-most widely held book; the following being an example quote: [5]

“A living body is not a fixed thing but a flowing event, like a flame or a whirlpool: the shape alone is stable, for the substance is a stream of energy going in at one end and out at the other. We are particular and temporarily identifiable wiggles in a stream that enters us in the form of light, heat, air, water, milk, bread, fruit, beer, beef Stroganoff, caviar, and pate de foie gras. It goes out as gas and excrement—and also as semen, babies, talk, politics, commerce, war, poetry, and music. And philosophy.”

The following is oft-cited variation and or aggregation quote of the above: [1]

“A living body can be likened to a flame or a whirlpool. The shape alone is stable. The substance is a stream of energy going in at one end and out at the other. Life’s purpose to maintain and perpetuate itself is understandable as a physico-chemical phenomenon studied by the science of thermodynamics. We are temporarily identifiable wiggles in a stream that enters us in the form of light, heat, air, water, milk …. It goes out as gas and excrement—also as semen, babies, talk, politics, war, poetry, and music.”

Watts interests seemed to be focused on mixing Eastern philosophy with science with focus on explaining and understanding the "ultimate things" and the whys and wherefores of existence.

Chopra
Watts can be compared, in some sense, to new age writer Deepak Chopra, albeit with more a sober grounding. Chopra, in fact, stated that he was “spellbound” after reading Watts’ 1951 The Wisdom of Insecurity, along with Carl Jung, who me met at one point. [2]

Quotes | By
The following are notable and or interesting quotes:

“Anybody who tells you that he has some way of leading you to spiritual enlightenment is like somebody who picks your pocket and sells you your own watch.”

“Life is not a problem to be solved, but an experience to be had.”

“You yourself are the eternal energy which appears as this universe. You didn’t come into this world; you came out of it. Like a wave from the ocean.”

“The meaning of life is just be alive. It is so plain and obvious and so simple. And yet, everybody rushes around in a great panic as if it were necessary to reach something beyond themselves.”

“But I’ll tell you what the hermits realize. If you go off into a far, far forest and get very quiet, you’ll come to understand that you’re connected with everything.”