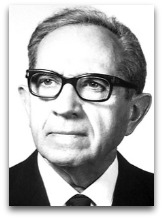 In hmolscience, Albert Claude (1899-1983) was a Belgian physician and cellular researcher, generally known for his 1930 cell fractionation technique, with which he discovered the cell organelles, namely: mitochondrion (which, in his Harvey Lecture, he famously first characterized as the “power plants of the cell”), chloroplast, endoplasmic reticulum, Golgi apparatus, ribosome, and lysosome; was the first to apply electron microscope in biology, thereby in 1945 publishing the first detailed structure of the cell; particularly noted for his 1973 response, during a dinner party, to a query, by a governor, likely of New York, about the existence of god, him being the then leading expert on the origin of life at the cellular level.

In circa 1973, Claude, in respect to noted anecdotes, was invited to the party of a “Governor of a State”, as he reflected in his Nobel Lecture—which likely would be the New York Governor, either Nelson Rockefeller (1 Jan 1959 to 18 Dec 1973) or Malcolm Wilson (18 Dec 1973 to 31 Dec 1974) (Ѻ), being that in the Rockefeller Institute, New York, in the 1930s and 1940s, is where he did most of his pioneering work, during which time the governor and his wife approached Claude with questions about the “existence of god”, him being the so-close to the unknown virus/cell then-conceptualized life/non-life boundary, about which he recalls as follows:

“I am afraid that in this description of the cell, based on experimental facts, I may be accused of reintroducing a vitalistic and teleological concept which the rationalism and the scientific materialism of the 19th and early 20th centuries had banished from our literature and from our scientific thinking.

Of course, we know the laws of trial and error, of large numbers and probabilities. We know that these laws are part of the mathematical and mechanical fabric of the universe, and that they are also at play in biological processes. But, in the name of the experimental method and out of our poor knowledge, are we really entitled to claim that everything happens by chance, to the exclusion of all other possibilities?

About a year ago, I was invited to an official party by the Governor of a State. As the guests were beginning to leave, the Governor took me aside in a room nearby. He looked concerned and somewhat embarrassed. ‘Dr. Claude,’ he asked, ‘you seem to know much about life. Please tell me: what do you think about the existence of God.’ The question was unexpected, but I was not unprepared. I told him that for a modern scientist, practicing experimental research, the least that could be said, is that we do not know. But I felt that such a negative answer was only part of the truth. I told him that in this universe in which we live, unbounded in space, infinite in stored energy and, who knows, unlimited in time, the adequate and positive answer, according to my belief, is that this universe may, also, possess infinite potentialities. The wife of the Governor had joined us in the meantime. Hearing this, she seized her husband by the arm and said, ‘You see, I always told you so.’

Life, this anti-entropy, ceaselessly reloaded with energy, is a climbing force, toward order amidst chaos, toward light, among the darkness of the indefinite, toward the mystic dream of love, between the fire which devours itself and the silence of the cold. Such a nature does not accept abdication, nor skepticism.

No doubt, man will continue to weigh and to measure, watch himself grow, and his universe around him and with him, according to the ever growing powers of his tools. For the resolving powers of our scientific instruments decide, at a given moment, of the size and the vision of our universe, and of the image we then make of ourselves. Once Ptolemy and Plato, yesterday Newton, today Einstein, and tomorrow new faiths, new beliefs, and new dimensions.”

The “life = anti-entropy” section of this lecture has since gone on to become a semi-popular quote. [2]

“Is it absurd to imagine that our social behavior, from amoeba to man, is also planned and dictated, from stored information, by the cells—these autonomous and all-contained units of living matter?”

References
1. Claude, Albert. (1974). “The Coming Age of the Cell: Inventory of Living Mechanisms, Biochemistry and Electron Microscope, and the View of the Impact of the Findings on our Status and Thinking” (Ѻ), Nobel Lecture, Dec 12.
2. Gaither, Carl C. and Cavazos-Gaither, Alma E. (2012). Gaither’s Dictionary of Scientific Quotations (pg. 1165) (Ѻ). Springer.