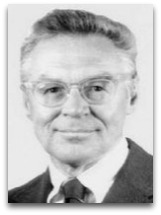 In science, Albert L. Lehninger (1917-1986) was an American biochemist noted for his 1971 book Bioenergetics, on the subject of bioenergetics, wherein he supposedly reasons that the entropy of living systems cannot be defined in classical thermodynamic terms because such systems are said to not exist at equilibrium, but rather in open metastable states (see: metastable equilibrium). [1] The following quote exemplifies Lehninger’s perspective:

“Today, all scientists agree that the laws of physics and chemistry, including the principles of thermodynamics, also hold in the biological world: there can be no vitalism or black magic by which living organisms sustain and perpetuate themselves.”

Lehninger, in general, is noted for his 1982 textbook Principles of Biochemistry, having gone through five editions, and published in seven languages, which since has become something of a classic in college biochemistry courses.

Education
Lehninger completed his BA at Wesleyan University (1939), his MS (1940) and PhD (1942), in biochemistry, at the University of Wisconsin-Madison.

References
1. Nahum, Gerald. (2005). “A Proposal for Testing the Energetics of Consciousness and its Physical Foundation (33-pgs)”, Submitted for review to Consciousness and Cognition.
2. Lehninger, Albert L. (1973). Bioenergetics - the Molecular Basis of Biological Energy Transformations (pg. 1). The Benjamin/Cummings Publishing Co.