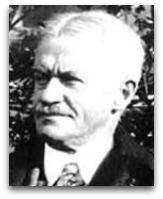 In science, Albert Nock (1870-1945) was an American libertarian author, educational theorist, and social critic noted for his 1931 to 1932 commentary on the intellectual stature of Willard Gibbs in respect to the comparatively lessened respect for scientific knowledge by Americans in general, say as compared to the Germans in its peak intellectual leadership years.

Overview
In 1931, Nock, in his The Theory of Education in the United States, the Page-Barbour Lectures at the University of Virginia, recounted the following telling anecdote about American engineer Willard Gibbs: [1]

“In the last generation, this country produced one of the most eminent men of science in the whole world. His name was quite unknown among us while he lived, and it is still unknown. Yet I may say without too great exaggeration that when I heard it mentioned in a professional assembly in the Netherlands two years ago, everybody got down under the table and touched their foreheads to the floor. His name was Josiah Willard Gibbs.”

The "professional assembly", Nock refers to here, may likely have been some convention or meeting of sorts associated with the Dutch school of thermodynamics, although this is only a reasoned guess. Nock elaborates on why he brings this anecdote up as follows:

“Now, the object of this observation is not to intimate that spurious or inflated reputations are easily made among us; whether this be true to any great extent or not is no concern of ours at the moment. We may raise the question, however, the general interest in science which as a people we are supposed to have, actually exists. It is taken for granted, especially by unfriendly critics of the ‘great traditions’ discipline, that as a people we are of a scientific turn, and have great interest in science. I see no reason to believe this.

We are greatly interested in the practical outcome of invention and discover’ that is clear, and we need not go too far out of our way to attribute a mercenary motive to this interest. We are also, I think, greatly possessed of an indolent, passive and fitful curiously about certain superficial and speculative concerns about sciences, which causes us to skim their large popular literature with some frail and tenuous semblance of attention. We are also susceptible to sensation-mongering, such as that which poor Einstein found so ready to be visited on him when he came here; a most discreditable and repulsive performance on the part of our journalists who, as you no doubt remember, drew on the very last resources of their loathsome profession in the effort to exploit his super achievements. But that we have, as for instance the Germans so notably have, an ingrained regard for science, an instinctive respect for whatever is wissenschaftlich [know-nomically or scientific-scholarly], a sense that the right way is the one to be followed—this is in my judgment rather than doubtful, for I nowhere see evidence of the working of any such spirit. Therefore when it is assumed that this turn for science has anything to do with a disparagement of the ‘great traditions’ discipline, I would suggest that we examine carefully the premises of this assumption before were accept it.”

Nock reports, in his Jun 1932 to Dec 1933 Journal of These Days, the following rather remarkable possibly the most ironic accounts in history: [2]

“At one time they were going to dismiss Willard Gibbs from the faculty, but somebody made an impassioned speech for him, saying it would never do to let out such a good Yale man who was so well connected. So they kept him, not because he was almost beyond doubt the greatest mind in theoretical chemistry that ever lived, but because he was a loyal son of Yale and of a good Connecticut family. Gibbs could not get his work published for a long, except by getting it into the journal of a society over there that recorded the doings of the first families.”

The irony of this situation is parodied well by circa 1902 visit of William Thomson to Yale, recounted by Irving Fisher, wherein Thompson made the following rather accurate forecast: [3]

“By the year 2000 Yale would be best known to the world for having produced J. Willard Gibbs.”

The only thing that might remotely compare to this would be German physicist Albert Einstein getting rejected from ETH Zurich for teaching assistant position (1900) or having his doctorate rejected from the University of Bern (1907) "after" he had already deduced the so-called most famous equation of all time: [4]