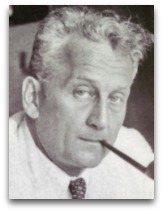 In existographies, Albert Szent-Gyorgyi (1893-1986) (CR:27) was a Hungarian physiologist and bioenergetics pioneer noted, in animate thermodynamics, for his startling 1948 statement that “life, as such, does not exist”, for his 1961 electron theory of “living matter”, and for his 1974 proposal to replace the term “negative entropy” (or negentropy) with “syntropy”, which he pictured as a force which causes living things to reach “higher and higher levels of organization, order and dynamic harmony.” [1]

Gyorgyi’s views on life and energy were and inspiration to Chinese-born English biophysicist Mae-Wan Ho. [2]

At some point along the way, he also expressed his motto that "we need to fight against entropy."

Influenced
A noted student of Szent-Gyorgyi was John Avery who worked under him during the summers of 1960 and 1961.

Life, as such, does not exist

See main: Life does not exist

Szent-Gyorgyi, has become semi-famous for his oft-repeated, startling to some, statement that “life, itself, does not exist”, a view that has been cited up to the present in what is life debates. In 1948, Szent-Gyorgyi, in his Nature of Life: a Study of the Muscle, stated the following—which seems to be the first mention of this view—in his chapter section on colloidal chemical considerations: [9]

“The biologist wants to understand life, but life, as such, does not exist: nobody has ever seen it. What we call ‘life’ is a certain quality, the sum of certain reactions of systems of matter, as the smile is the quality or reaction of the lips.”

In 1972, Szent-Gyorgyi, in his The Living State, opens to the following paragraph: [11]

“Every biologist has at some time asked ‘what is life?’ and none has ever given a satisfactory answer. Science is built on the premise that nature answers intelligent questions intelligently; so if no answer exists, there must be something wrong with the question. Life, as such, does not exist. What we can see and measure are material systems which have the wonderful quality of ‘being alive’. What we can ask more hopefully is ‘what are the properties which bring matter to life? Though I do not know what life is, I have no doubt as to whether my dog is alive or dead. Life is a paradox. It is easy to understand why man always divided his world into ‘animate’ and ‘inanimate’, anima meaning soul, the presence of which had to explain queer behavior. The most basic rule of inanimate nature is that it tends toward equilibrium which is at the maximum of entropy and the minimum of free energy. As shown so delightfully by Schrodinger in his little book What is Life? (1945), the main characteristic of life is that it tends to decrease its entropy. It also tends to increase its free energy.”

“In my search for the secret of life, I ended up with atoms and electrons, which have no life at all. Somewhere along the lines, life has run out through my fingers. So, in my old age, I am now retracing my steps [back to the cell].”

Szent-Gyorgyi, goes on, at this point, to state that “life is not a thing to be studied: rather, ‘being alive’ is a quality of some physical systems.” [14] This last fingers quote, to note, has been taking up recently by the “spirituality” and metaphysical theorists, as a basis to argue, e.g., for Vedic-based spirit theory (Ѻ), astral spirit-based active principles (Ѻ), and or paranormal ideas. (Ѻ)

In 1978, Szent-Gyorgyi, in his symposium article “The Living State and Cancer”, was opening to the same “life, as such, does not exist” idiom, in regards to the question of what is life?, but quickly parlays the issue off to the assertion that the conceptual dualistic divide of the world between animate and inanimate or alive and not-alive is solved by reference to what he calls a “living state” which he describes as a “special physicochemical state, a state which can be described in terms of exact sciences, and has to fit into the great order of the universe, having been created by the same forces as the universe itself.” Here, after continuing with the statement that “we must search for an understanding and an answer to our question with a wide natural philosophical outlook and fit life into the great scheme of creation”, it would seem, possibly, that Szent-Gyorgyi is venturing into religious-framed talk (check). [13]

A citation from 1993 article, from a religious magazine article—the implication of the possibility that life does not exist has great implications for religious belief—is as follows: [8]

“Albert Szent-Gyorgyi, the Nobel laureate discoverer of Vitamin C, startled his readers when he wrote: ‘Life, as such, does not exist.’ He explained: ‘What we can see and measure are material systems which have the wonderful quality of...”

In 2006, authors Asim Kurjak and J.M. Carrera, in their chapter “The Beginning of Human Life: Scientific and Religious Controversies”, section: “The Definition of Life”, in their Textbook of Perinatal Medicine, state the following: [10]

“Some authors say that life as such does not exist—no one has ever seen it. Szent-Gyorgyi says that the noun ‘life’ has no significance because there is no such thing as ‘life’. Le Dantez holds that the expression ‘to live’ is too general, and that it is better to say that a dog ‘dogs’ or a fish ‘fishes’ than a ‘dog or a fish lives’.”

Kurjak argues that Szent-Gyorgyi's position may have possible implications on the so-called "legal" rights of an embryo, such as depicted adjacent.

Atlan
French biophysicist and philosopher Henri Atlan—who notably studied, for a time, under Aharon Katchalsky—in his work on bioethics, namely on the problems involved in speaking about “life” in an essential fashion, e.g. claiming that the genome contains the “essence of life”, repeatedly quoted Szent-Gyorgyi’s claim that “life as such does not exist”, which he interprets to mean that: [12]

Meaning that, in the context of bioethics, that “any thinking of the living cannot maintain its rigor if it postulates life as an essentialist notion” as his collected works editors Stefanos Geroulanos and Todd Meyers summarize (2011).

Religion
Szent-Gyorgyi’s views on relation between religion and science seem to be of the covert ontic opening type. In his 1977 “Drive in Living Matter to Perfect Itself”, to explain, he says that the coordinated behavioral adaptation such as the woodpecker’s drilling and probing, as “random mutation, has the probability of zero”, and goes onto state that “I am unable to approach this problem [compound traits] without supposing an innate ‘drive’ in living matter to perfect itself”, which he goes onto label as “syntropy”, the opposite of entropy—presumably culled from Schrodinger’s 1944 what is life discussions—an idea that religious-science reconciler Gary Parker refers to as an “impersonal creative force”. (Ѻ) This is consistent in Szent-Gyorgyi’s 1978 discussions, above, about how his dualist life theory needs to fit in the “great scheme of creation”. [13] We also note, in 1928, when Szent-Gyorgyi discovered vitamin C, originally he did not know what the compound was, thinking it was some type of sugar compound; hence, he was going to name it ig-nose, a combination of the suffix –ose the sugar designating ending (as in glucose or fructose) and the prefix ig-, signifying that he was ignorant as to what it was, and thereby sent in the name suggestion “God-nose” to the editor of the Biochemical Journal, meaning that “God knows what this compound is?”. (Ѻ)(Ѻ) Explicit atheists do not, in short, make comments like this.

Living matter | Electron theory of life
Szent-Gyorgyi is noted for his 1961 take on the concept of the photon mill and its role in the study of animate, earth-bound chemical processes: [4]

"It is common knowledge that the ultimate source of all our energy and negative entropy is the radiation of the sun. When a photon interacts with a material particle on our globe it lifts one electron from an electron pair to a higher level. This excited state, as a rule has but a very short lifetime and the electron drops back within 10-7 to 10-8 seconds to the ground state giving off its excess energy in one way or another. Life has learned to catch the electron in the excited state, uncouple it from its partner and let it drop back to the ground state through its biological machinery, utilizing its excess energy for life processes."

“Biology, hitherto, did not contribute considerably to the foundations of physics. On the other hand it expects its basic problems to be solved by physics. Biology, being essentially the study of life, bios, its main problem is: what is life? The question must have been asked innumerable times without finding a satisfactory answer. This is an unusual situation, experimental science being based on experience that nature answers intelligent questions intelligently. If she is silent, something may be wrong with about the question.”

“We can formulate our question about the nature of life in a different way, which is more in the language of science. We can ask, for instance, what is the difference between ‘animate’ (living) and ‘inanimate’ (non-living). We can try to compare the two bit by bit noting the difference in terms of exact science.”

This is all fairly cogent, with nitpick point that animate things such as robots, automatons, steam engines, watermills, or windmills, etc., are, in colloquial speak, considered non-living, but still animate, hence deriding his classification scheme. In any event, the end of his argument concludes with something to the effect that the difference between the two, living and non-living, in his mind, has something to do with a peculiarity with electrons or electron orbitals in so-called living things, or in his own words:

“It was almost forty years ago that I suggested that electron orbitals in living matter may form band patterns which promote electron mobility.”

Molecular goggles | Perspective
Szent-Gyorgyi stated the following molecular goggles view (advanced intelligence view) (Matrix view) in the sense that he sees a monkey, or what one might call a monkey molecule, in a jungle as a particularly concentrated locus of molecules with an inflow and outflow of material: [5]

“If one had the kind of vision [e.g. electron microscope/quantum microscope] that allowed one [see: advanced perspective] to see molecules and were in a jungle, one would see molecules wandering about everywhere, at random. In this ceaseless wandering, one might recognize a locus in which molecules of various types were particularly concentrated, which held its form [bound state] approximately while myriads of molecules streamed in and out [turnover rate]; and that locus would be a monkey in the jungle. That continuous inflow and outflow of material [metabolism], and whatever of its structure endured, would not only make that a unique monkey from among monkeys but would ensure that it changed [see: Heraclitus] from moment to moment throughout its entire existence.”

Quotes | By
The following are quotes by Szent-Gyorgi

“Life is driven by nothing else but electrons, by the energy given off by these electrons while cascading down from the high level to which they have been boosted up by photons. An electron going down around is a little current. What drives live is thus electric current.”