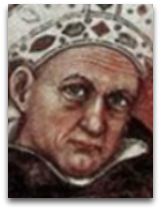 Overview
Magnus was was born in Suabia, at Larvigen, on the Danube, in 1205. He is accredited with excessive stupidity in his youth, but his devotion to the Virgin was rewarded by a vision, which was accompanied by an intellectual illumination, and he became one of the greatest doctors of his time. He was made provincial of the Dominicans, and was appointed to the bishopric of Ratisbon, which subsequently {60} resigned to pursue his scientific and philosophic studies in a delightful conventual retreat at Cologne. In his old age he relapsed into the mediocrity of his earlier years, which gave rise to the saying that from an ass he was transformed into a philosopher, and from a philosopher he returned to an ass. [2]

Quotes | On
The following are quotes on or about Magnus:

“When I returned home my [Victor Frankenstein] first care was to procure the whole works of this author [Cornelius Agrippa], and afterwards of Paracelsus and Albertus Magnus. I read and studied the wild fancies of these writers with delight; they appeared to me treasures known to few besides myself. I have described myself as always having been imbued with a fervent longing to penetrate the secrets of nature. In spite of the intense labor and wonderful discoveries of modern philosophers, I always came from my studies discontented and unsatisfied. Sir Isaac Newton is said to have avowed that he felt like a child picking up shells beside the great and unexplored ocean of truth. Those of his successors in each branch of natural philosophy with whom I was acquainted appeared even to my boy's apprehensions as tyros engaged in the same pursuit.”

“Albertus Magnus, a celebrated philosopher of the thirteenth century, is said to have constructed an automaton which not only performed all the apparent motions of life, but absolutely answered questions. It is recorded of Thomas Aquinas, that, having accidentally seen the head, he was so terrified that he broke it in pieces, upon which Albert exclaimed: 'the meal of thirty-years work!' (Periit opus triginta annorum!) Though this appears one of the earliest instances of a speaking automaton constructed by one of the laity, there is no doubt but that the method of conveying answers to various interrogatories, by the agency of concealed pipes or a speaking trumpet, was practiced at a very early period. That the impostor Alexander (c.105-170) (Ѻ), however, caused his Aesculapius to speak in this manner is expressly related by Lucian. He took, says this author, instead of a pipe, the gullet of a crane, and transmitted the voice through it to the mouth of the statue. But the invention of the invisible girl, which may be considered as an improvement on the oracular responses of the darker ages, infinitely surpassed any of those hitherto recorded.”

“The aim of natural science is not simply to accept the statements of others, but to investigate the causes that are at work in nature.”

“That matter and power are the principles of each body is clear, for having taken away all the accidental forms, we arrive at length at substantial form which, being abstracted per intellectum, there remains a something very occult which is prima material.”

— Albertus Magnus (c.1270), The Generation of the Elements (De Generatione Elementorum); cited by Mellor in section on matter and energy (1922) [3]

“Nature does not make animal kinds separate without making something intermediate between them; for nature does not pass from extreme to extreme nisi per medium.”