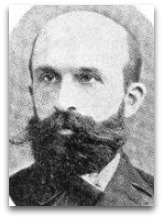 In social chemistry, Albion Small (1854-1926) (Scott 50:36) was an American sociologist noted for his 1899 “A ‘Unit’ in Sociology”, wherein he posited that "general sociology" might well be modeled akin to "general chemistry".

“General chemistry is sometimes defined as ‘the science of atoms and their behavior.’ The same chemists who use this definition acknowledge that they have never discovered the hypothetical ‘free atom.’ The only close likeness in this respect that I can discover between general sociology and general chemistry or biology is in the fact that we must use the conception of human individuals, although we can find no such object in reality as the free individual. If we should describe sociology as ‘the science of human individuals and their behavior’ we should be in verbal uniformity with one way of defining chemistry; but I do not see any profit from that fact in the shape of more knowledge about society. Unless we are willing however, to take as our ultimate concept ‘the human atom,’ ‘the individual,’ ‘the social man,’ or whatever we may choose to name the irreducible element in societary combinations, I see nothing but arbitrariness in the plan of adopting a ‘unit of inquiry.’ Is it not a purely gratuitous assumption that at present sociology needs or can use a unit of inquiry in the sense to which Professor Lindsay seems most to incline?”


This concept was conceived in critique of American sociologist Samuel Lindsay’s earlier 1898 discussion of units of consideration in sociology. [2]

Education
Small studied theology from 1876 to 1879 at the Andover Newton Theology School, in Newton, Massachusetts; then German history, social economics, and politics at the University of Leipzig and the University of Berlin, from 1879 to 1881; then taught at Colby College, Waterville, Maine, in the 1880s; in 1889, he completed his PhD, with a thesis “The Beginnings of American Nationality”, at Johns Hopkins University. In 1892, Small founded the Department of Sociology at the University of Chicago and in 1895 founded the American Journal of Sociology, the oldest scholarly journal of sociology in the United States. [3] During this period, in the early years of forming the University of Chicago sociology department, Small studied with American engineer and physicist turned sociologist and economist Frank Carlton, who thought along similar lines and mindset, in regards to modeling sociology and economics on physics and chemistry. [4]