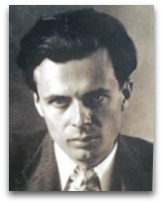 In literature thermodynamics, Aldous Huxley (1894-1963) was an English writer noted for his use of the concept of entropy in his literary theme. Aldous is the grandson of the famous English biologist Thomas Huxley, commonly known as “Darwin’s bulldog”, coiner of the term social chemistry, and his older brother was the evolutionary biologist Julian Huxley, promoter of the view that evolution is anti-entropic. This may explain from where Aldous became acquainted with entropy.

“I had motive for not wanting the world to have a meaning; consequently assumed that it had none, and was able without any difficulty to find satisfying reasons for this assumption. The philosopher who finds no meaning in the world is not concerned exclusively with a problem in pure metaphysics, he is also concerned to prove that there is no valid reason why he personally should not do as he wants to do, or why his friends should not seize political power and govern in the way that they find most advantageous to themselves. … For myself, the philosophy of meaninglessness was essentially an instrument of liberation, sexual and political.”

This quote frequently is cited by theists in religions vs. science debates (Ѻ) (vid | 3:41). In his first mention of the term “meaninglessness”, Huxley cites the following closing passage of David Hume’s 1748 Enquiry: [8]

Entropy | Energy
In 1937, Huxley, in his Ends and Means, citing the early work of Joseph Unwin (1935), began to make use of the term “human entropy”. [5] A glimpse of this view is discussed in the following passage, from Ends and Means, in which he discusses how the energy created by sexual restraint is “expansive”: [1]

“When the rigorous tradition (of sexual restraint) is inherited by a number of generations, the energy becomes productive. Productive energy does not spend itself exclusively in expansion; it also goes into science, speculation, art, social reform. Where productive energy persists for some time, a factor which Dr. Unwin calls ‘human entropy’ comes into play.”

This passage is very interesting, in that it is very aligned with modern human chemistry and human thermodynamics, as compared to most other writers on entropy, who fumble around with disorder, degradation, and chaos, etc. In this same period, he also discussed entropy and time’s arrow. [4]

In 1962, Huxley, in his book Island, comments in several places on entropy and the second law. In his aunt’s loss of her breasts, via cancer, as being a product of the second law, as follows: [2]

“A few months later the other breast had to be cut off. After that there were the X rays, the radiation sickness and then, little by little, the degradation … If it weren’t so unspeakably hideous, it would be really funny. What a masterpiece of irony! Here was a soul that radiated goodness and love and heroic charity. Then, for no known reason, something went wrong. Instead of flouting it, a little piece of her body started to obey the second law of thermodynamics. And as the body broke down, the soul began to lose its virtue, its very identity. The heroism went out of here, the love and the goodness evaporated. For the last months of her life she was no more the Aunt Mary I had loved and admired; she was somebody else, somebody almost indistinguishable from the worst and weakest of the old people she had once befriended and been a tower of strength to. She had to be humiliated and degraded; and when the degradation was complete, she was slowly, and with a great deal of pain, put to death in solitude.”

“One thinks one’s self something unique and wonderful at the center of the universe. But in fact one’s merely a slight delay in the ongoing march of entropy. And that precisely is the first half of Buddha’s message. Transience, no permanent soul, inevitable sorrow. But he didn’t stop there, the message had a second half. This temporary slow-down of entropy is also pure undiluted Suchness. This absence of a permanent soul is also the Buddha Nature.”

This seems to be entering on religious thermodynamics topics.

Quotes | On
The following are Huxley related quotes:

“Swept up by the seeming unstoppable force of Vilfredo Pareto’s juggernaut in the 1930s, Huxley wrote a prominent review of Mind and Society in 1935, and declared Pareto his mentor. What attracted Huxley to Pareto was his cynicism toward human stupidity, the cavalier attitudes societies adopt towards issues of power.”