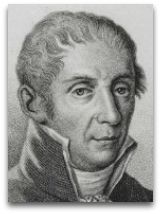 In existographies, Alessandro Volta (1745-1827) (IQ:175|#245) (Cattell 1000:684) [RGM:140|1,500+] (SIG:13) (CR:18) was an Italian physicist noted for his famous 1776 “animal electricity” debated with his friend Luigi Galvani on the topic of the mechanism of the twitching of dead frog legs in an electric circuit the result of which was the invention of the battery in 1800. This debate can loosely be said to mark the start of the vitalism debate, the issue as to what separates a “living thing” from a “dead thing” or an animated thing (such as dead frog legs) moved by purely electro-physico-chemical means.

Eponyms
The term “voltage” and the unit “volt” are named in honor of Volta.

Battery
In 1800, Volta stacked small sheets of silver and zinc on top of each other with intermediate layers of salty water and showed that electrical current passed through if the circuit was closed—an electric “pile” or Voltaic pile that eventually came to be called a battery. [1]

Volta claimed that his electric pile was a perpetual motion machine, which only stopped because it had become “clogged” in the process of operation. [2]

Chemistry
The invention of the battery was soon employed by chemists.

In 1805, Luigi Brugnatelli (1859-1928) reasoned that just as Volta had used chemicals to make electricity, the opposite process—using electricity to cause chemical reactions—might work in the same manner, and performed electrodeposition of gold using the Voltaic pile. He wrote the following about electroplating technique in the Belgian Journal of Physics and Chemistry: "I have lately gilt in a complete manner two large silver medals, by bringing them into communication by means of a steel wire, with a negative pole of a voltaic pile, and keeping them one after the other immersed in ammoniuret of gold newly made and well saturated".

In 1807, English chemist Humphry Davy discovered that electricity transforms chemicals during an experiment where he used Volta’s electric pile to separate salts via electrolysis. He showed that the electromotive force, which drives the electric current through a circuit containing a single voltaic cell, was caused by a chemical reaction, not by the voltage difference between the two metals. He also used the voltaic pile to decompose chemicals and to produce new chemicals.

In 1831, after studying various electrolysis experiments, Swedish chemist Jacob Berzelius proposed that salt has an internal structure comprised of an acid, with a negative charge, and a base, with a positive charge. [3]

In 1833, English chemist physicist Michael Faraday discovered that each depositing mineral, such as copper, needs a different electric charge to make it release its atoms.

In 1852, English chemist Edward Frankland developed the theory of chemical valence or degree of combining power in an element.

Quotes | By
The following are quotes by Volta:

“You must be ready to give up even the most attractive ideas when experiment shows them to be wrong.”

“The language of experiment is more authoritative than any reasoning: facts can destroy our ratiocination—not vice versa.”

“What is possible to do well, in physics in particular, are those things that can be reduced to degrees and measures.”