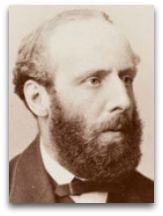 In science, Alexander Freeman (1838-1897) was English mathematician, a correspondent of James Maxwell and Willard Gibbs, and translator of the 1878 English edition of Joseph Fourier’s 1822 Analytical Theory of Heat, to which he added in various original notes on the life and work of Fourier. [1] Freeman was also one of the editors of one of the first English translations of French chemist Antoine Lavoisier’s Elements of Chemistry. [2]

Maxwell’s thermodynamic surface
Freeman, it seems, was the first to tell American engineer Willard Gibbs about the clay model water statute that Irish physicist James Maxwell had made, after spending an entire winter on it, based on Gibbs 1873 graphical thermodynamics papers. In February 18th, 1875 letter to Gibbs, Freeman states: [3]

“You will be gratified to hear that Prof. Maxwell has made a clay model of your thermodynamic surface wherein entropy, energy, and volume are the three coordinates, and is able to explain a great deal by it.”