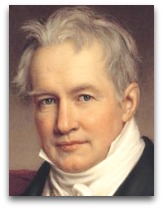 In existographies, Alexander Humboldt (1769-1859) (IQ:185|#82) (Cattell 1000:94) [RGM:83|1,310+] was Prussian geographer, naturalist, explorer, romantic philosopher, oft-characterized polymath and fabled "last persons to know everything"; younger brother to Wilhelm Humboldt (1767-1835); noted for being one of the first to propose that South America and Africa were both joined; in Jena (1797), with his brother Wilhelm, Friedrich Schiller, and Johann Goethe, the four discussed, in Goethe's own words, “all of nature from the perspectives of philosophy and science”.

Overview
In 1844, Humboldt, in his multi-volume Cosmos: a Sketch of a Physical Description of the Universe¸ attempted to sketch out his view of things, generally stitched around his ideas on terrestrial magnetism and geology, with focus on minerals, or “inorganic terrestrial life”, in Linnaean speak, wherein he tries to “elevate nature” with “lofty language”; a few salient examples of which are as follows:

“The physical description of the world, considering the universe as an object of the external senses, does undoubtedly require the aid of general physics and of descriptive natural history, but the contemplation of all created things, which are linked together, and form one whole, animated by internal forces, gives to the science we are considering a peculiar character.”

— Alexander Humboldt (1844), Cosmos: a Sketch of a Physical Description of the Universe, Volume One (pg. 59)

“As we have now passed in review the whole sphere of inorganic terrestrial life, and have briefly considered our planet with reference to its form, its internal heat, its electromagnetic tension, its phenomena of polar light, the volcanic reaction of its interior on its variously composed solid crust, and, lastly, the phenomena of its two-fold envelopes—the aerial and liquid ocean—we might, in accordance with the older method of treating physical geography, consider that we had completed our descriptive history of the globe. But the nobler aim I have proposed to myself, of raising the contemplation of nature to a more elevated point of view, would be defeated, and this delineation of nature would appear to lose its most attractive charm, if it did not also include the sphere of organic life in the many stages of its typical development. The idea of vitality is so intimately associated with the idea of the existence of the active, ever-blending natural forces which animate the terrestrial sphere, that the creation of plants and animals is ascribed in the most ancient mythical representations of many nations to these forces, while the condition of the surface of our planet, before it was animated by vital forms, is regarded as coeval with the epoch of a chaotic conflict of the struggling elements.”

Here, as we see, all of this is closet coded theism, e.g. “created things”, and anthropomorphism, e.g. “animated by internal forces” (compare: Holbach), bloated with unnecessary words, e.g. “But the nobler aim I have proposed to myself, of raising the contemplation of nature to a more elevated point of view”. Here we see the specifics of a purported-to-have-been-genius, who nobody cites anymore.

Quotes | By
The following are quotes by Humboldt:

“There are three stages of scientific discovery: first people deny it is true; then they deny it is important; finally they credit the wrong person.”

“In considering the study of physical phenomena, not merely in its bearings on the material wants of life, but in its general influence on the intellectual advancement of mankind, we find its noblest and most important result to be a knowledge of the chain of connection, by which all natural forces are linked together, and made mutually dependent upon each other; and it is the perception of these relations that exalts our views and ennobles our enjoyments.”

— Alexander Humboldt (1844), Cosmos: a Sketch of a Physical Description of the Universe (Ѻ)