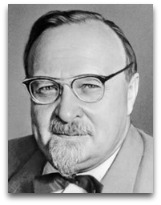 Overview
In 1922, Oparin, during a meeting of the Russian Botanical Society, introduced his concept of a primordial organism arising in a brew of already formed organic compounds. [8]

In 1924, Oparin, in his The Origin of Life, argued that compounds of nitrogen, carbon, hydrocarbons, and other oxygen-containing organic molecules fell from the cooling clouds, filling the oceans, and from these a complex aggregate called colloids formed, and eventually transformed into an organic body. [1]

In 1936, Oparin, argued, based on the 1931 ‘coazervate’ theory of H. Budenberg de Jong, that inorganic molecules, in an oxygenless atmosphere, could react via the action of sunlight, to produce a ‘primeval soup’ of organic molecules; which in turn could combine to create a ‘coacervate droplet’ (compare: cell-as-molecule), such as shown below:

which, in turn, would grow by fusion with other droplets, and reproduce through fission into daughter droplets, gaining a primitive metabolism in which those factors that promoted cell integrity survived, whereas those that didn’t became extinct. [2]

Vernadsky
Oparin, of note, attacked Vladimir Vernadsky’s 1926 ‘theories on perpetual life’ (Ѻ), who stated that they were not in accord with the “objective data of modern science.” [5]

Education
In 1917, Oparin completed a degree in plant physiology at Moscow State University and became a biochemistry professor there in 1927, focusing on plant enzymes and metabolism.

Difficulties
Oparin's coacervate droplet origin of life theory, to note, falls apart as baseless, when analyzed via physical chemistry; such as found in Lionel Harrison 1993 “cell-as-molecule” approach, in upgrade to cell as first living thing, according to which the notion of "life" found in the mechanism of a "first reaction" becomes untenable, and therefore defunct. [4]

Quotes | On
The following are Oparin-related quotes:

“Oparin’s great contribution to the theory of the origin of life is that he postulated a long chemical evolution as a necessary preamble to the emergence of life, thinking of the evolutionary process as passing through three distinct chemical phases, from: inorganic chemistry, to organic chemistry, to biological chemistry.”

“While rejecting vitalism, teleology, and mysticism, Haeckel taught a view of nature that advocated a cosmic perspective and an evolutionary framework, and thereby surpassed the crudely mechanistic and materialistic [see: crude materialism] explanations of the world. Going beyond Darwin, Haeckel proposed that life had emerged spontaneously from matter; an hypothesis anticipated by over fifty years: the abiogenetic theory of Alexander Oparin.”

“Neither the theory of spontaneous generation nor the theory of the continuity of life solves rationally the problem of the origin of life, since these theories are based on the tacit assumption of an absolutely impassable hiatus between animate and inanimate nature.”

“At the dawn of the European civilization, with the Greek philosophers (Ѻ), there were two clear tendencies in this problem. Those are the Platonic and Democritian trends, either the view that dead matter was made alive by some spiritual principle or the assumption of a spontaneous generation from that matter, from dead or inert matter.”