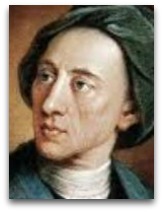 In existographies, Alexander Pope (1688-1744) (IQ:180|#109) (Cattell 1000:82) (CR:43) was an English poetry philosopher, noted, in hmolscience, for his 1734 moral poetry work An Essay on Man, an attempt to grapple with the issue of growing scientific knowledge in the face of stagnant religious logic, conceived as the centerpiece of a proposed system of ethics, aimed to be made into a larger work (project never completed), a set of four moral epistles, in short, commented on by a number of thinkers: Voltaire, Jean-Jacques Rousseau, Gottfried Leibniz, Immanuel Kant, John Mill, among others.

Religion
Pope has been characterized a "deist" (Joshi, 2014).

“It is absurd to imagine that the earth was made for the sake of mankind, and not of the universe. No one who is not blinded by pride and ignorance, could ever suppose it.”

Shall burning Aetna, if a sage requires,
Forget to thunder, and recall her fires?
On air or sea new motions be imprest,
Oh blameless Bethel! to relieve thy breast?
When the loose mountain trembles from on high
Shall gravitation cease, if you go by?
Or some old temple, nodding to its fall,
For Chartres' head reserve the hanging wall?

“For how stands the fact? That, next to the greatness of these cosmic forces, the quality which most forcibly strikes everyone who does not avert his eyes from it is their perfect and absolute recklessness. They go straight to their end without regarding what or whom they crush on the road. Optimists, in their attempts to prove that ‘whatever is, is right,’ are obliged to maintain, not that nature ever turns one step from her path to avoid trampling us into destruction, but that it would be very unreasonable in us to expect that she should. Pope's ‘Shall gravitation cease when you go by?’ may be a just rebuke to anyone who should be so silly as to expect common human morality from nature. But if the question were between two men, instead of between a man and a natural phenomenon, that triumphant apostrophe would be thought a rare piece of impudence. A man who should persist in hurling stones or firing cannon when another man 'goes by,' and, having killed him, should urge a similar plea in exculpation, would very deservedly be found guilty of murder. In sober truth, nearly all the things which men are hanged or imprisoned for doing to one another are nature's every-day performances.”

In 1875, Balfour Stewart and Peter Tait, in their The Unseen Universe, citing Pope, via Mill, also digressed on this. [3]

In 1896, English science-religion reconciler George Millin, in his Evil and Evolution, citing Pope, via Mill, states the following on Pope’s 4.128: [4]

“In your perfect world, if a rock should fall when a man happened to be under it, what would save that man from being crushed? I cannot tell. I could not have suggested the law of latent heat to save the man from being drowned if he happened to be under a snow-covered hill when the temperature suddenly rose one degree above freezing point. That gravitation should cease is perhaps not so inconceivable as Pope would evidently have supposed.”

Whatever IS, is RIGHT
Pope, in his essay section 1.287-92, stated the following:

“All nature is but art, unknown to thee;
All chance, direction, which thou canst not see;
All discord, harmony not understood;
All partial evil, universal good.
And, spite of pride, in erring reason's spite,
One truth is clear, 'Whatever is, is right'.”

The last comment “Whatever IS, is RIGHT”, written seemingly in relation to or on the heels of Gottfried Leibniz (1646-1716) and his 1734 "this is the best of all possible worlds" logic (Ѻ), drew a lot of heat. Voltaire, e.g., initially referred to Pope’s Essay on Man as "the most beautiful, the most useful, the most sublime didactic poem ever written in any language", but in his Candice (1759), made Pope’s 1.292 “Whatever IS, is RIGHT” assertion a theme that he satirized. Leibniz' assertion, that this is the "best of all possible worlds", subsequently, provided the basis for the satirical work Candide.

Superior beings, when of late they saw
A mortal man unfold all nature's law,
Admir'd such wisdom in an earthly shape,
And shew'd a Newton as we shew an ape.

Could he, whose rules the rapid comet bind,
Describe or fix one movement of his mind?
Who saw its fires here rise, and there descend,
Explain his own beginning, or his end;
Alas what wonder! man's superior part
Uncheck'd may rise, and climb from art to art;
But when his own great work is but begun,
What reason weaves, by passion is undone.

Quote | On
The following are quotes on Pope:

“In the same year [age 8] in which I began Latin, I made my first commencement in the Greek poet with the Iliad. After I had made some progress in this, my father put Pope's translation into my hands. It was the first English verse I had cared to read, and it became one of the books in which for many years I most delighted: I think I must have read it from twenty to thirty times through. I should not have thought it worthwhile to mention a taste apparently so natural to boyhood, if I had not, as I think, observed that the keen enjoyment of this brilliant specimen of narrative and versification is not so universal with boys, as I should have expected both a priori and from my individual experience. Soon after this time I commenced Euclid, and somewhat later, algebra, still under my father's tuition.”

Quotes | By
The following are other noted quotes by Pope:

“Nature and nature’s laws lay hid in the night. God said ‘let Newton be!’ and all was light.”

“Nor public flame, nor private, dares to shine;
Nor human spark is left, nor glimpse divine!
Lo! thy dread empire, Chaos! is restored;
Light dies before thy uncreating word:
Thy hand, great Anarch! lets the curtain fall;
And universal darkness buries all.”