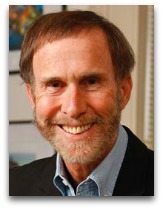 In existographies, Alexander Rosenberg (1949-) (CR:15), or “Alex Rosenberg”, is an American economics and biology philosopher, a self-defined atheist "naturalist", noted for his 1980 two cultures namesakes usages of the joint terms: sociophysics and sociochemistry (see: socio-physical chemistry), for his 1985 reductionism discussions, and for his 2011 reaction-provoking book The Atheist’s Guide to Reality: Enjoying Life without Illusions, wherein he promotes what he refers to as "nice atheism", a "blind variation", "dumb luck", "random chance", "accident" themed, "mindless" process, "entropy = disorder" thermodynamics-conceptualized model of evolution, based on game theory and terms such as "thermodynamic noise", according to which everything is an nihilistic allusion, there is no morality, meaning, or purpose to existence, but that the closest thing to what he calls "core morality" is to promote the fitness of our ancestors, based on some type of Hamilton rule logic of being nice, the end concluding motto of which is stay happy, keep going, and when in doubt "take Prozac or equivalent serotonin reuptake inhibitor". [1]
[1]

Blind | Prediction
Rosenberg spends a good amount of time referring to the "blindness" of history and "blind variation" (term used 33 times), according to which while we rightly predict macro-human phenomenon, such as the weather or planetary motion, as well micro-human phenomenon, such as chemical reactions, we are completely "blind" in our ability to about human motions:

“Scientism realizes that Asimov’s aspirations—to make human history and human affairs subject to prediction and control [Foundation Series, 1942-1993]—were overly optimistic. Scientism recognizes that history is blind, and the empirical sciences of human behavior are myopic at best.” (pg. 243)

Certainly a read through of Morris Zucker’s 1945 Field Theory of History (volume one) would cure Rosenberg of some of this tendency towards mis-logic in respect to what physics, chemistry, and thermodynamics can say about human history of human future. The issues with Rosenberg’s mis-logic about thermodynamics based historical prediction, was long ago elaborated by C.G. Darwin, and his 1952 The Next Million Years, who asserted that thermodynamics has the ability to predict the next million years of human evolution. The issue here seem to be that whereas Darwin was trained in thermodynamics, Rosenberg was not; hence the mislogic. Molecules, in short, are not blind and do not move around blindly as Rosenberg incorrectly asserts. Put a hydrogen molecule H2 and oxygen molecule O2 in proximal vicinity and they will move not "blindly", but towards each other, water H20 will the the product, and free energy will be the driving force. The famous floating magnets experiment is a visual clarifier of this logic. This logic naturally enough scales up to explain human movement.

The only thing that humans or molecules seem to be "blind" about, to clarify, is seemingly captured in the Heisenberg uncertainty principle.

Drive
While a majority of Rosenberg’s assertions and extrapolations go off the rails of sound physics and chemistry, some of his statements, with respect to “drive” seem to be in the remote neighborhood of correctness:

“Whatever is in our brain driving our lives from the cradle to grave, it is not purposes. But it does produce the powerful illusions of purposes, just like all other purposeless adaptations.” (pg. 205)

“In a world where physics fixes all the facts, where the second law drives all adaption, there are no future or past designs.” (pg. 162)

“The second law must be the driving force in adaptive evolution.” (pg. 79)

Other statements on the nature of drive, however, become rather incongruous:

“Take any biological process that looks like it’s an intelligent and flexible response to changes in the environment that it must be driven by a purpose, plan, or goal. Behind that appearance will be found some engine of blind variation and a filter passively screening for fitness, whether it’s the building of the brain, navigating an interchange, or keeping up your end of the conversation … Darwinian natural selection is simply physics at work among organic macromolecules.” (pg. 92)

This last assertion, about Darwinian selection occurring among molecules, was ridiculed frankly by Robert Pirsig (Lila: Inquiry into Morals, 1991).

The first part, about the engine of blind variation being behind drive, smacks in the face about what thermodynamics, the science behind the operation of “engines”, has to say about drive at the chemical level, which is that free energy is the driving force, a logic that traces back to Johann Blumenbach’s 1871 formative drive theory (see: bildungstrieb), a logic carried through the power center works of: Kant (1790), Schiller (1795), Goethe (1809), Schopenhauer (1818), Nietzsche (1865), Freud (1910), to name a few (see: Freud-Schiller drive theory). Rosenberg, in his nihilism belief system, seems to be ignorant of all of this?

Thermodynamics | Difficulties
A noticeable issue with Rosenberg’s attempt to parlay physics as the say all of everything, is his lack of clear understanding thermodynamics, particularly in respect to his overly-employed the “second law requires” this, or the “second law says” that, etc., claims. One example is the following: [1]

“The evolution and maintenance of adaptions by natural selection wins the prize for greatest efficiency in carrying out the second law’s mandate to create disorder.”

This is an example of science lost in transition. The original Clausius 1865 statements of the first and second law are that “energy of the universe is conserved” and that the “transformation content of the universe tends to a maximum”, respectively.

Molecule theory | Difficulties
Rosenberg’s polemic, in his effort to dismiss purpose from the humanities, is to scaffold on the blind random chance model of natural selection based evolution, running on what he calls the “mindless process” of Darwinian theory, conjoined with the purposeless universe hypothesis of physics, to argue the following in congruent statments: [1]

“The most complex and impressive adaptions are the result of a chain of events that starts with no adaptations at all, just molecules in random motion. That leaves nothing for purposes, ends, goals, to do anywhere in nature.” (pg. 57)

“As molecules bounce around, any amount of order, structure, pattern almost always gives way to disorder, to entropy.” (pg. 65)

The issue here, in respect to the first statement, is that molecules do not move in random motion, but along free energy gradients. This gets into the terminological subtleties of chemical teleology, not that there is teleology in chemistry or chemical processes, but where are thermodynamically quantifiable reaction starts or initial states and reaction ends or final states, whereby, according to thermodynamics, there are indeed “ends” in nature, contrary Rosenberg’s assertion. Accordingly, as humans, as molecules (see: human molecule), do not move around randomly, but along free energy gradients, quantified by initial states and final states, or starts and ends.

Rosenberg, beyond this, cited the 1880 “without god, everything is permissible” motto of Fyodor Dostoyevsky. One thing that is not permissible, if god does not exist, however, is perpetual motion—one of which is perpetual motion of the living kind, which Rosenberg seem to defend. Subsequently, it is chemical thermodynamics, not god, that "governs" what is permissible and not permissible in the varieties of human movements and actions—contrary to Rosenberg’s all movements and actions are possible “there is no basis for morality” nice nihilism supposition.

Nice atheism | Reality
In 2011, Rosenberg published his The Atheist’s Guide to Reality, in which, in his own words, he tried to do the following:

“In The Atheist’s Guide to Reality I tried to coopt the word ‘scientism’ and to argue that science can answer the persistent philosophical questions that trouble people, including the nature of reality, the purpose of life, the existence of a soul, the grounds of morality, whether we have free will, and the meaning of human history. Most of the answers science gives to these questions are unpopular and people neither understand them nor want to hear them.”

The abstracted "big questions" and solutions or short answers given by Rosenberg in his book are as follows: [1]

“Is there a god? No. What is the nature of reality? What physics says it is. What is the purpose of the universe? There is none.What is the meaning of life? Ditto. Why am I here? Just dumb luck. Is there a soul? Is it immortal? Are you kidding? Is there free will? Not a chance! What is the difference between right and wrong, good and bad? There is no moral difference between them. Why should I be moral? Because it makes you feel better than being immoral. Is abortion, euthanasia, suicide, paying taxes, foreign aid, or anything else you don’t like forbidden, permissible, or sometimes obligatory? Anything goes. What is love, and how can I find it? Love is the solution to a strategic interaction problem. Don’t look for it; it will find you when you need it. Does history have any meaning or purpose? It’s full of sound and fury, but signifies nothing.”

The contents Rosenberg's book, interestingly, provoked American writer Leon Wieseltier to attack it on the front cover of The New Republic as "The worst book of the year", about which he summarized as follows: [5]

“I take this cutting-edge wisdom [above Q&A abstract] from the worst book of the year, a shallow and supercilious thing called The Atheist’s Guide to Reality: Enjoying Life Without Illusions, by Alex Rosenberg, a philosopher of science at Duke University. The book is a catechism for people who believe they have emancipated themselves from catechisms. The faith that it dogmatically expounds is scientism. It is a fine example of how the religion of science can turn an intelligent man into a fool.”


Wieseltier, to note, is anti-science in the humanities and liberal arts to the bone. In his 2013 response to Steven Pinker on scientism, entitled “Crimes Against Humanities”, to exemplify, Wieseltier states: [6]

In any event, the above criticism is well-representative of the bubbling science vs religion issue in America, a subject about which very few American professors are willing to breach, in respect to the tenuous subject of physical humanities.

Education
Rosenberg originally started as a physics student but switched to philosophy after reading David Hume’s Treatise on Human Nature. [4] Rosenberg completed his BA in 1967 in philosophy at City College of New York and his PhD in 1971 with a dissertation on the nature of microeconomic laws at Johns Hopkins University. Rosenberg, since 200, has been a professor of philosophy at Duke University (see also: Adrian Bejan and Roy Weintraub), where he tends to work in three areas: metaphysics, especially the nature of causality, the philosophy of economics, and the philosophy of biology.

Quotes | On
The following are quotes on Rosenberg:

“Here’s a Philosophy TV dialogue (Ѻ) between John Dupre (left) and Alex Rosenberg (right). They are both physicalists — the believe that the world is described by material things (or fermions and bosons, if you want to be more specific) and nothing else. But Dupre is an anti-reductionist, which is apparently the majority view among philosophers these days. Rosenberg holds out for reductionism, and seems to me to do a pretty good job at it.”