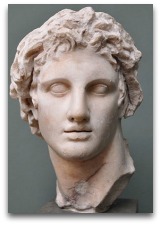 Overview
In 336BC, Alexander, at age 20, succeeded his father, Philip II (382-336BC), following his assassination, to the throne and inherited a strong kingdom and an experienced army, and over the next ten years, by age 30, created one of the largest empires in ancient history, therein becoming not only King of Macedonia (336BC), but also Pharaoh of Egypt (332BC), King of Asia (331BC), and King of Persia (330BC).

Alexander, supposedly, initiated the process of fusion of the Egyptian religion with Greek religion via syncretism.

Alexander, supposedly, claimed to the divine right to rule Egypt from the god Amun, whom he identified with the Greek god Zeus, aka Amen-Zeus. [1]

Alexander, in sum, initiated the process of unification of Greek science with Egyptian theology to form the proto-roots of what, over the next 600 years, would eventually become Christianity under the so-called Greco-Roman empire.

Osiris-Horus | Jesus
In 2016, Charles Pope, in his Alexander the Great: Beyond the Divide, argued that Alexander, as conqueror of the world, during the Greek recension, attempted to invert the long-standing traditional model of pharaoh (or emperor) as “Horus in life” and “Osiris in the afterlife”, via the new god Serapis, and therein become himself an Osiris-Horus in life, and therein become the main prototype to the later Roman-Hebrew man-god character of Jesus (150AD), as formulated during the Roman recension; the gist of which is as follows: [2]

“Alexander was the primary inspiration for Christ.Alexander was such a towering figure that at least some influence on emerging Christianity would be expected. However, upon closer inspection the parallels between Alexander and Jesus turn out to be both extensive and profound. Alexander the Great's birth had been "immaculately conceived" (see: virgin birth) and then "celestially announced." He was a precocious youth that confounded his elders. He railed against conventional thinking (orthodoxy) and was revered everywhere, except by his own family and home town. His campaign began with a wedding. He cast out demons and was accused of having a demon. He fed the multitudes and spoke in parables. He was particularly fond of the mustard seed. He traveled incessantly. He prayed for those that spitefully used him. He walked on water and calmed the tempest. He was warned against entering his capital, but approached his prophesized demise with eager resolve. He was lifted up into the "heavens" and also descended to the "underworld." His higher calling was to attain a faraway kingdom, and one that could only be gained through a symbolic death and ascension. He comforted and later appeared to his followers. He moved mountains and enveloped those who believed in him from the onslaught of the godless.”

“The wolf was a symbol of Benjamin (the Hebrew Horus), which along with Osiris were major inspirations (role models) for Alexander. Alexander strove to invert the traditional metamorphosis of a Horus that (through death) became an Osiris. He was instead an Osiris that shed this role (also through a symbolic death) in order to become a Horus. Consistent with this, the new god Serapis could be depicted with the club of Hercules (Horus).”

The following, also, is a related factoid:

“When Caligula [12AD-41AD] was a boy, a seer told him that he would never be emperor until he walked on water. So he built a pontoon bridge across the Bay of Naples, put on the breastplate of Alexander the Great, and paraded night and day across the bay, throwing lavish sex orgies in the light of bonfires. He had a very good memory. He exiled his own wife and proclaimed himself a god, dressing up as Apollo, Venus (a goddess), Mercury, and Hercules. He demanded that everyone, from senators to guards to guests and public crowds, refer to him as divine in his presence.”

Ptolemy I
In 323BC, Ptolemy I (see also: Ptolemy), a former Macedonian general under Alexander, after Alexander’s death (de-reaction), was appointed ‘satrap’ (governor) of Egypt. In 305BC, Ptolemy I declared himself king of Egypt, and later “soter” (savior) of Egypt.

Ptolemy I employed an Egyptian priest and a member of an Athenian priestly family and gave them the charge to work together to combine the religions. [1]

Ptolemy I, supposedly, linked the Greek god Hades to the Egyptian gods Osiris and Apis, combining them into the go Serapis, and established the divine right to rule through Serapis.

Horus, likewise, got identified with Apollo, Hathor with Aphrodite and Thoth with Hermes.

Peculiarities
Alexander carried the works of Homer and Aristotle into battle (Ѻ).

Education
Alexander was tutored by Aristotle until the age of 16.

“There is nothing impossible to him who will try.”

“I cry, because, having just found out [add philosopher] that there are many worlds, I have not yet been able to conquer one.”

— Alexander the Great (c.335BC), famous response to being asked why he cried [3]