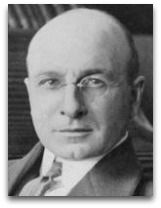 In human thermodynamics, Alexis Carrel (1873-1944) was a French surgeon-biologist and social philosopher noted for his 1935 Man: the Unknown, cited by Mehdi Bazargan (1956), wherein he argued that the second law was useless at the psychological level and also commented, controversially, in support of eugenics (in only the German edition), to the effect that Germany has begun to take “energetic measures” to weed out defective humans.

Thermodynamics
On thermodynamics, in regards to humans, Carrel, in his Man: the Unknown, stated: [1]

“The second law of thermodynamics, the law of dissipation of free energy, indispensable at the molecular level, is useless at the psychological level, where the principles of least effort …”

“It was generally admitted, not only that miracles did not exist, but that they could not exist. As the laws of thermodynamics make perpetual motion impossible, physiological laws oppose …”

Lastly, as has been cited, regarding feelings and thermodynamics: [2]

“…cultivated only for itself, for the elegance of its methods, for its light and beauty. Its goal is the material and spiritual benefit of man. As much importance should be given to feelings as to thermodynamics. It is indispensable that our …”

Eugenics
Carrel advocated the use of gas chambers to rid humanity of "inferior stock". His endorsement of this idea began in the mid-1930s, prior to the Nazi implementation of such practices in Germany. In the 1936 German introduction of his book, at the publisher’s request, he added the following praise of the Nazi regime which did not appear in the editions in other languages:

“The German government has taken ‘energetic measures’ against the propagation of the defective, the mentally diseased, and the criminal. The ideal solution would be the suppression of each of these individuals as soon as he has proven himself to be dangerous.”

As to what exactly these ‘energetic measures’ were, that may never be known; in particular, as human thermodynamic instruments are still yet to be developed (even in modern times).

Influence
Interestingly, Iranian thermodynamicist Mehdi Bazargan cited Carrel in his 1956 book Thermodynamics of Humans, in what seems to be a discussion of the relationship between internal energy and entropy of a person in relation to physiological age and cell and tissue growth, or something along these lines. [3]

“The atmosphere of libraries, lecture rooms and laboratories is dangerous to those who shut themselves up in them too long. It separates us from reality like a fog.”

“To what extent is any given man morally responsible for any given act? We do not know.”