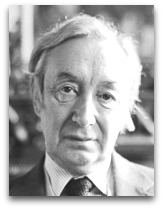 Quotes | On
The following are quotes on Ayer:

“Ayer was catapulted to fame byLanguage, Truth and Logic [1936],a book published at the philosophically precocious age of 26. Inspired by a year in Austria in the company of the Vienna Circle, he had returned to proselytise his version of the group’s creed. The members of the Vienna Circle—which included Otto Neurath, Rudolf Carnap and Kurt Godel—did not all agree in detail but they shared a conviction that all philosophical metaphysics and most ethics to date was not so much wrong as meaningless nonsense. Scientific claims made sense because there was some way of testing their truth. But how can we test, say, whether everything that exists is essentially immaterial or whether an action is morally right or wrong? These claims appear to be meaningful because they come in the form of grammatically correct sentences with proper words. But since nothing could ever show them to be true or false they were, the Circle believed, meaningless.”

Quotes | By
The following are quotes by Ayer:

“William James was being teased by a theological colleague who said to him: ‘A philosopher is like a blind man in a dark cellar, looking for a black cat that isn’t there.’ ‘Yes’, said James, ‘and the difference between philosophy and theology is that theology finds the cat’.”