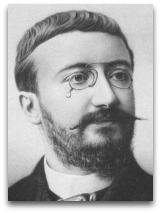 Micro-organisms
In 1888, Binet, in his The Psychic Life of Micro-Organisms: a Study in Experimental Psychology, sought to show that psychological phenomena begin among the very lowest classes of beings, e.g. the simple cellule or protoplasm.

In 1899, Binet was appointed to the Commission for the Retarded, a repercussion of a new French law that mandated school for children ages six to fourteen, whose aim was to develop a “test” to differentiate between normal and abnormal children, so to be able assign each to different classrooms.

In c.1902, French psychologist Theodore Simon (1872-1961), while an intern at the asylum in Perray-Vaucluse studying abnormal children, began to work with Binet to develop a test that could measure intellectual development of children ages 3-12.

Influenced
In 1912, William Stern, a German psychologist, added to Binet's intelligence testing work by inventing the concept of "mental quotient", defined as the ratio of the age the test was designed for divided by the age of the person who takes the test:
-

Thus, for instance, if a eight-year-old took a test designed for a ten-year-old, and passed, the child's MQ would be 1.25 or ten divided by eight.

In 1916, Lewis Terman, a professor at Stanford University, modified Stern's formula by multiplying it by 100, creating a new formula, 100(MQ), or:
-

“If a drop of acetic acid be introduced beneath the glass-slide, in a preparation containing quantities of Infusoria (Ѻ), the latter will be at once seen to flee from all directions like a flock of frightened sheep.”

“Though the fact of an exercise of ‘choice’ in taking food is settled beyond question, yet the interpretation of this phenomenon is a matter of much uncertainty. Some writers, as Charlton Bastian for instance, explain this choice of food as an affinity of chemical composition existing between the organism and the nutriment. This idea does not lead to anything. Others compare the discrimination made by the Proto-organism between objects presented to it, to the action of a magnet which in some way selects particles of iron that have been mixed with particles of other substances.”

“When the Amoeba, in its rampant course, happens to meet a foreign body. In the first place, if the foreign particle is not a nutritive substance, if it be gravel for instance, the amoeba does not ingest it; it thrusts it back with its pseudopodia. This little performance is very significant; for it proves, as we have already said, that this microscopic cellule in some manner or other knows how to choose and distinguish alimentary substances from inert particles of sand.”

“This exercise of ‘choice’, in micro-organisms, is one of the most incomprehensible of phenomena; it is exceedingly difficult to explain it without resort to anthropomorphism.”