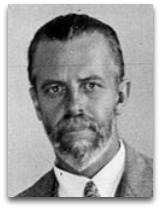 In existographies, Alfred Kroeber (1876-1960) (CR:6) was an American cultural anthropologist noted for []

Overview
In 1915, Kroeber, in his “Eighteen Professions”, listed eighteen propositions that in his view embody history as a field of study; numbers fifteen and seventeen, shown below, respectively, being the most contentious: [1]

“There are no laws in history similar to the laws of physico-chemical science.”

“The causality of history is teleological.”

American physical historian Morris Zucker comments on the last of these: [2]

“This mumbo-jumbo of medieval phraseology connecting causality with purpose in history is another evidence of that professorial phenomenon, while the body moves and breaths in the twentieth century, while the mind is five hundred years behind its time.”

Cultural death
In 2009, Kroeber's 1944 theories of a society or cultural “dying”, described in what seem to be physical chemistry terms, shown below, were cited by American physical chemist Thomas Wallace in his socioeconomic thermodynamic theory of the rise and fall of civilizations [5]

“Cultural dying is a replacement of most of the material and patterns with new material and patterns developed within the culture, until after a sufficient length of time, the transformation is so great that it is descriptively more useful to speak of the end product as a new culture, or one different from the original one.”

This is an intuitive view being that what are perceptually conceived as "biological entities", such as birds and bees, are actually carbon-centric reactive molecules, formed through chemical reaction synthesis, and transformed likewise in a reverse type of reaction, but do not actually "live" or "die", in a physical chemistry sense.

Influenced
In 1936, George Devereux completed his PhD under Kroeber.

Quotes | By
The following quotes by Kroeber:

“The entity civilization has intrinsically nothing to do with individual men nor with the aggregates of men on whom it rests. It springs from the organic, but is independent of it. The mental processes of groups of men are, after all, only the collected processes of individuals reacting under certain special stimuli. Collective psychology is therefore ultimately resolvable into individual human psychology, just as this in turn is resolvable into organic psychology and physiology.”

“Civilization reacts to civilization, not to geography.”

“There are only individual minds. When these react on each other cumulatively, the process is merely physiological.”