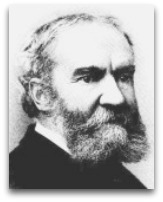 In existographies, Alfred Mayer (1836-1897) (IQ:150|#567) was an American physicist noted for his 1878 “floating magnets” experiment, in he placed various numbers of positively-charged needles in corks floating on water, at a height above which he held a larger negatively charged side of a powerful magnet, and recorded the geometric distributions of the corks, per number of corks. [1]

Education
In 1865, Mayer was a professor of physics and chemistry at Pennsylvania College of Gettysburg, and in the following year he was awarded his PhD from the same college.

Thermodynamics
In a visit to Trenton and Niagara Falls, Mayer found that on misty days the water was heated by the arrest of motion after the descent, as one would expect in accordance with the first law of thermodynamics. If the atmosphere were dry, however, the evaporation more than offset the heating effect. [3]

References
1. (a) Mayer, Alfred Marshall. "Experiments with Floating and Suspended Magnets, Illustrating the Action of Atomic Forces, the Molecular Structure of Matter, Allotropy, Isomerism, and the Kinetic Theory of Gases." Scientific American, supplement 5 [no. 129] (June 22, 1878): 2045-2047.
(b) Mayer, Alfred Marshall. "A Note on Experiments with Floating Magnets; Showing the Motions and Arrangements in a Plane of Freely Moving Bodies, Acted on by Forces of Attraction and Repulsion; and Serving in the Study of the Directions and Motions of the Lines of Magnetic Force." American Journal of Science, 3rd ser., 15 (1878): 276-277. (c) Also: "Note on Floating Magnets [letter]." Ibid. 15 (1878): 477-478;
(d) Mayer, Alfred M. (1878). "On the Morphological Laws of the Configurations Formed by Magnets Floating Vertically and Subjected to the Attraction of a Superposed Magnet; with Notes on Some of the Phenomena in Molecular Structure Which These Experiments May Serve to Explain and Illustrate." American Journal of Science, 16: 247-256.
2. (a) Thomson, Joseph, J. (1897). “Cathode Rays.” Philosophical Magazine, 44, 293.
(b) Thomson, Joseph, J. (1904). “On the Structure of the Atom: an Investigation of the Stability and Periods of Oscillation of a number of Corpuscles arranged at equal intervals around the circumference of a circle; with application of the results to the Theory of Atomic Sturcture.” Philosophical Magazine, Series 6, Vol. 7, No. 39. March, pgs. 237-65.
(c) Plum pudding model – Wikipedia.
3. Mayer, Alfred G. and Woodward, Robert S. (1916). “Biographical Memoir of Alfred Marshall Mayer (1836-1897)” (32-pgs). Washington: National Academy of Sciences, Jan.