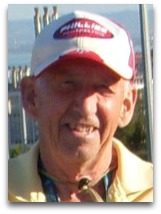 In existographies, Alfred Rogers (1933-) (CR:33), who goes by "Al Rogers", is an American philosopher noted for his 2010-launched cite LifeDoesNotExist.com, where he expounds on his view that life does not exist, that the hydrogen atom is not alive, and therefore what we perceive or conceive as “life” is but a difference in complexity as compared to less complex single atom; a view independently arrived at by American electrochemical engineer Libb Thims (2009) and American science journalist Ferris Jabr (2013), all explicitly stated views of the historical defunct theory of life positions and variations, apex of which is English geneticist Francis Crick’s 1966 decisive statement that “we must abandon the word ‘alive’”, but that he did not know what the alternative was? (see: life terminology upgrades). . [1]

Overview
In 1988, Rogers began scouting for publisher for a draft book entitled Our Tool, Our Master, wherein certain economic ideas were expounded, such as outlined on his Life Does Not Exist website. In the 1990s, Rogers came up with the idea that life is something that does not exist, when he “reasoned that there was no difference between life and non-life and that the perceived difference was due to a difference in complexity.” [5] The following is his 2010 online description gist of his reasoning behind his conclusion that life does not exist: [1]

“Life does not exist in the sense that life is not absolutely different from non-life. The difference between life and non-life is like the difference between plants and animals. A recent article in the proceedings of the National Academy of Sciences reported that bacteria locked in Antarctic ice for 100,000 to 8-million years resumed growing when given warmth and nutrients. Could they have been alive for all that time? Could any life processes been going on for that period? If not, can a living thing spend an intermittent part of its life as a non-living thing? I think this is incongruous with life and non-life being absolutely different. During the frozen period all the conditions for life, including the DNA existed, but life did not exist. More commonly many seeds remain viable for many years under certain conditions. They go through a life cycle in part of which they are not alive. Can a living thing be not alive during part of its life?”

As to the specific year he came up with this premise, Rogers states the following: [3]

“I don't know in what year I came up with the idea. It came about by realizing that what we call life can go through periods of being non-life-a seed being dormant for hundreds of years. Life, such as tobacco molds can be produced from non-life. It then appears that the difference is complexity rather than something intrinsic. I do not believe a hydrogen atom is alive.”

“Let's see if I can do a little better than ‘scattered thoughts.’ I was raised as a Presbyterian and had prolonged discussions with an agnostic in army basic training. I read books advocating each viewpoint including works of Thomas of Kempis (c.1380-1471) (Ѻ) and Saint Augustine and concluded by age 24 that I could not believe anything supernatural. This left me with a value system without foundation so I inquired into what was most important in one earthly existence.

I believe the primary value is happiness. This is a very difficult value to conceptualize. Negatives such as sickness, hunger, poverty, poor living conditions are easier to clarify than positives such as beauty, creativity, and recognition of individual worth.

The question of life emerged in the obtuse reasons for the beginning of life in biological and evolutionary studies. My studies in biology exposed me to arbitrary descriptions of life and I concluded that ‘life’ and ‘non-life’ were essentially the same. I concluded then that there were no essential differences between ‘life’ and ‘non-life.’ It also appeared that the perceived difference was complexity. Old Faithful has life-like movement but is easier to understand than a paramecium.

I have more recently espoused support of the Christian church because the morality it teaches is close to my values and is able to teach these values better than any other organization. I realize the supernatural teachings of the church conflict with my own but this may be necessary to establish moral values in most people.

Their supernatural beliefs, to reiterate, are not mine but agnostics and atheists do nothing to promote a moral system that is very important to social happiness.”

Religion
In 1956 (age 23), Rogers made a deconversion from Christianity to a new non-supernatural belief system based philosophy. [1] In 2014, the following is what Rogers had to say about his religious beliefs, after queried about Dawkins number: [4]

“I would be a 6 on the Dawkins scale, although 10 appeals to me. Some belief in god is based on the belief that he cannot be known but can only experienced (Martin Buber, 1778-1965) (Ѻ). This cannot be fully rejected or proved because only some people would experience god. It seems most logical to me that life is only a more complex form of non-life and there for does not exist. I have built my own value system based on the belief that we have only one existence and that the greatest good is to be happy and to extend happiness to those we love. Many of the resulting values are similar to those of Jesus of Nazareth so I am an attendee and supporter of a Christian church although I can never be a member or take communion or pray.I believe the church promotes moral behavior better than any other organization and thereby contributes to general happiness. Some of the ideas on the discussion you sent are repellant to me because of the zeal to be first to formulate an idea. My ideas are freely shared with anyone who agrees with them.”

The first salient issue in the above statement, is that Rogers seems to be unaware that "Jesus of Nazareth", aka Jesus Christ, never existed as well, but rather was one of a long string of son of of the sun god rewrites lineages, revolving around the Passion of Osiris, aka Osiris anointed, i.e. "christened with oil", prior to dual-deity sexual process resurrection, as described in the so-called story of Osiris and Isis (Stella Maris, aka Virgin Mary) (see: religio-mythology transcription and syncretism).

The second salient issue with the above, while certainly a workable model for Rogers and his being, is the so-called utilitarian calculus happiness model system value model, such as expounded on, in various hues, by those including: Jeremy Bentham, John Mill, Francis Edgeworth, and more recently Sam Harris, among others, is that it does not take into account the factors, such as the so-called real world "Rossini model", as outlined by Frederick Rossini (1971), according to which freedom and security in social systems are governed by entropy and enthalpy determinates; the Henry Adams' waves and tides theory of universal connection (aka the Goethean daemonic); nor the "seeming to divine senses of purpose" Einstein model of motive as free energy peaks and wells differentials determine the course of time for humans; note to mention universal coupling theory; to name a few.

Education
Rogers graduated from Temple University in 1955 with a degree in pharmacy and thereafter worked as a pharmacist and is currently retired.

“At 81, I still do a sprint triathlon every year and am the current national champion in the 100 butterfly in the 80 to 84 age group.”

“I am interested in how people will react to the idea that the difference between life and non-life is only a matter of complexity. I also believe that when we are able to transmit human intelligence to a machine, machines will then produce entities far superior to humans and we will be irrelevant.”

“Life I think is still think is a useful term, in the same way that we have plants and animals. We’ve used it so often, it’s probably a good thing to keep using that as a term? What are some of the consequences of thinking this way? Is ‘life’ worthless, because we don’t think it’s any different from ‘non-life’? I don’t think so. If you were building a fireplace, and you were building a fire, and somebody gave you a Stradivarius (Ѻ) violin, I don’t think you would throw it on the fire?”