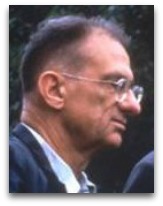 In thermodynamics, Alfred René Jean Paul Ubbelohde (1907-1988) was a Belgian-born English thermodynamicist noted for his suggestion that the term "animate matter" be used in place of the outdated term "life", which thus introduced the subject outline of "animate thermodynamics" and for his related postulate of local entropy decrease, arguing that living organisms, in the context of the second law, represent local decreases in entropy at the expense of increases in entropy elsewhere in the universe. Ubbelohde was one of the first to outline the subject of life thermodynamics and is noted to have coined the term disentropic. To quote Ubbelohde’s view of the laws of thermodynamics in relation to life: [1]

“So far as concerns the laws of thermodynamics there is reasonable expectation that more information about their bearing on life will be obtainable as the results of further experiments, particularly as the result of measurements on the energy and entropy changes accompanying the activities of living organisms.”

Butler | Time and Thermodynamics
In a review of Ubbelohde’s 1947 Time and Thermodynamics, titled “Thermodynamics and Humanism”, British physical chemist John Butler surmises that Ubbelohde overall aim is to delve into the “wider human aspects of thermodynamics”, but concludes that this effort, confined mainly to short chapters at the beginning and end, “is disappointing”. Butler, in a possible reference to religious thermodynamics, comments in the end of his review that “I find it rather curious that he never mentions, though he may imply, the one inevitable teleological conclusion from the second law, that if the world as we know is steadily running down, there must have been a winding up.” [4]

In his opening chapter on Contributions to Thermodynamics to Scientific Humanism, the following is his condensed statement of what this refers to, a noted human thermodynamics quote:

“Contributions to the thermodynamics of scientific humanism [concerns] insights on the nature of time, [as in] personal or psychological time, and refers to the unification of the specialized sciences effected by the contributions they make to the proper study of mankind, man’s nature and destiny.”

In the concluding chapters of this book, he comments that "no final judgment can yet be given in the problem [of] how far living things obey the laws of thermodynamics ... but various aspects of disentropic behavior of living things are examined."

Man and Energy
Ubbelohde's 1954 book Man and Energy seems to be a follow-up expanded treatise to his 1947 book, with sections and chapters on "The Heat Birth?" (of the universe), Thermodynamics and Life, and Thermodynamic Laws and Cognition, in the latter of which it is discussed whether or not animate organisms can reverse the the overall trend of entropy in the world.

In 1954, Ubbelohde became a professor of thermodynamics at Imperial College London, a position he held until 1975. In 1961 he was awarded CBE; from 1961 to 1975 he was the head of the Chemical Engineering Department at Imperial College; following this he became a senior research fellow, Imperial College, 1975-1988; research interests included chemical thermodynamics, combustion, explosions and detonations, ionic melts, graphite and intercalation compounds. [2] Over the course of his career, Ubbelohde wrote six books and some 400 publications. [3] Ubbelohde was the chair of the Solvay Conferences on Chemistry (London), from 1959 to 1980. [5]