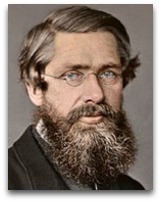 Overview
In 1855, Wallace, in his “On the Law which has Regulated the Introduction of New Species”, outlined a theory of evolution according to which organisms have resulted from long and uninterrupted series of changes. [1]

In circa 1856, Charles Lyell and Edward Blyth, independently, told Charles Darwin about Wallace’s paper, this goaded Darwin into writing up a “species sketch” of his theory, resulting in his now-famous 1859 On the Origin of Species.

Quotes | By
The following are quotes by Wallace:

“Every species has come into coincidence, both in time and space, with a pre-existing closely allied species.”

“Compared with our astounding progress in physical science and its practical application, our system of government, of administrative justice, and of national education, and our entire social and moral organization, remain in a state of barbarism.”