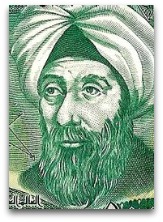 Overview
Alhazen’s prolific output has been attributed to the genius hiatus effect, namely, according to legend, owing to the caliph’s anger over his supposed inability to regulate the flow of the Nile, as he had supposedly boasted that he could build a dam that would stop the Nile River flooding, he feigned madness and was put under house arrest from 1011 to 1021, during which time he is said to have invented the camera obscura, theorizing that the light which when passing though a small hole, producing an inverted image on the wall of his prison cell, is the manner in which the human eye sees:

During this period of confinement, he also wrote his influential seven-volume Book of Optics, along with treatises on astronomy, geometry, number theory, and natural philosophy.
Optics | Light
Alhazen, in his Optics, pitted Euclid’s emission theory of vision against Aristotle’s intromission theory of light, corroborating with the latter. [2]

“How does light travel through transparent bodies? Light travels through transparent bodies in straight lines only.... We have explained this exhaustively in our Book of Optics. But let us now mention something to prove this convincingly: the fact that light travels in straight lines is clearly observed in the lights which enter into dark rooms through holes. The entering light will be clearly observable in the dust which fills the air.”

Quotes | On
The following are quotes on Alhazen:

“Ibn al-Haytham [Alhazen] was certainly the world’s greatest physicist in the almost two millennia gap between Archimedes and Galileo. There were others, like Biruni, Al-Kindi, Khwarizmi (it's a long list) but none of the others did physics (theory and experiment) in way we understand the subject today.”

“The seeker after the truth is not one who studies the writings of the ancients and, following his natural disposition, puts his trust in them, but rather the one who suspects his faith in them and questions what he gathers from them, the one who submits to argument and demonstration, and not to the sayings of a human being whose nature is fraught with all kinds of imperfection and deficiency. Thus the duty of the man who investigates the writings of scientists, if learning the truth is his goal, is to make himself an enemy of all that he reads, and, applying his mind to the core and margins of its content, attack it from every side. He should also suspect himself as he performs his critical examination of it, so that he may avoid falling into either prejudice or leniency.”


“Truth is sought for its own sake. And those who are engaged upon the quest for anything for its own sake are not interested in other things. Finding the truth is difficult, and the road to it is rough.”

“If learning the truth is the scientist’s goal, then he must make himself the enemy of all that he reads.”