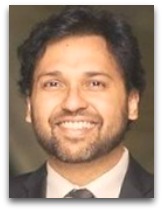 Overview
In 2016, Rizvi, in his The Atheist Muslim: a Journey from Religion to Reason, outlined his deconversion from Islam to reason-based secularism leaning towards atheism process; the opening pages of which discuss what it’s like being educated in Saudi Arabia, e.g. that kids aren’t allowed to make paper snowflakes because they look like the “star of David”, that tenth-graders were required to learn the following passages verbatim:

The 2005 and 2006 so-called “reformed” textbooks, per US pressure, for first-grade students contained the following:

Rizva asserts that these types of youthful indoctrinations is one of the reasons why 15 of nineteen 9/11 hijackers were Saudis.

Muhammad
Rizvi, in interview (2016), compared Muhammad, and his child bride Aisha (married: age 6; consummated: age 9), to Thomas Jefferson, his alleged relations to his mixed slave Sally Hemings (impregnated: age 22) (Ѻ), seemingly indicating that he believed Muhammad to have been are real person, rather than a mythical figure (see: Egyptian mythology).

Education
Rizvi complete his is MS in biochemistry at McMaster University, Ontario, his MD in Pakistan, after which he trained in oncologic pathology at SUNY Buffalo and Roswell Park Cancer Institute, and in 2011 switched careers to the field of medical communications, to focus on writing. [3]