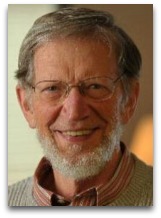 In hmolscience, Alvin Plantinga (1932-) is an American philosopher, whose general aim is to meld Christian apologeticism with naturalism, to show that science and religion are compatible, generally known for his 1974 Good, Freedom, and Evil, wherein he attempts to solve the problem of evil, via arguments about natural evil and moral evil, for his 1993 so-called evolutionary argument against naturalism, wherein he attempts to pit evolution theory against naturalism, to show that the former disproves the latter, in respect to the origin of truth, and for his 2011 Where the Conflict Really Lies, the cover of which shows compatibility between reactions (chemistry), plants (biology), and the cross (Christianity). [1]

Evolution | Naturalism argument
In 1993, Plantinga introduced his so-called “evolutionary argument against naturalism” (or Darwin’s doubt), cited by Maltesean agnostic anti-atheism Bo Jinn (2013), the gist of which is as follows: [2]

“Atheism gives us very good reasons to doubt the truth of any of our beliefs, bearing in mind that those beliefs are purely the result of matter and energy, unguided by any higher intelligence or scope (God), which is what naturalism (atheism) presupposes. There is no reason why a mindless evolutionary process centered only on survival is meant to produce beings capable of discovering truth, for the simple reason that evolution is not concerned in the very slightest with truth.”

The first incorrect point of this assertion, in respect to "survival" was pointed out by Robert Pirsig (1991) and his Chemistry professor paradox. The rest of the statement is incorrect, in that it misattributes presuppositions about "naturalism", i.e. what is natural and unnatural, in respect to matter and energy, to Darwin, whereas correctly the attribution is Clausius (or rather Gibbs, as per evolutionary systems are concerned, i.e. the replacement or rather usurpment of God's energy with Gibbs energy).

“Natural atheology, the attempt to prove that God does not exist or that at any rate it is unreasonable or irrational to believe that he does—in which the most widely accepted and impressive piece or representative has to do with the so-called problem of evil—is the opposite of natural theology, attempts to give successful arguments or proofs for the existence of God [in nature].”