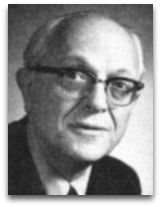 In existographies, Anatol Rapoport (1911-2007) (CR:8) was a Russian-born American mathematical biologist noted for []

Overview
Rapoport, at some point, did general systems theory research, with individuals including Ludwig Bertalanffy and Kenneth Boulding.

“It is a well-known fact that the likely contacts of two individuals who are closely acquainted tend to be more overlapping than those of two arbitrarily selected individuals.”

This would go on to form the basis of logic behind stimulating the idea behind American sociologists Mark Granovetter’s highly-cited 1973 theory of weak ties.

“It is misleading in a crucial way to view ‘information’ as something that can be poured into an empty vessel, like a fluid or even energy.”

Other
Rapoport, in coordination with Mechthilde Knoller, of note, did the first English translation of Hungarian-born American physicist Leo Szilard’s 1929 article “On the Decrease in Entropy in a Thermodynamic System by the Intervention of Intelligent Beings”. [1]