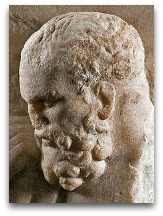 In existographies, Anaximander (c.610-564BC) (IQ:180|#117) (FA:2) (EvT:2|21+) (ACR:24) (GPhE:#) (CR:45) was a Greek philosopher noted for producing some of the first views on evolution, heliocentrism, and for a refined expansion Thales, something to the effect that the the "infinite" (or immortal and indestructible) is principle and element of the things (e.g. earth, air, fire, water) that exist.

Atheism | Theism
The philosophy expounded by Anaximander is attributed by some to have been an atheism-siding type of logic; some views of which are as follows:

“Anaximander was the chief of the old atheistic philosophers.”

In 2003, Jennifer Hecht, in her Doubt: a History, states that Anaximander is “the first philosopher for whom we have any detail, and he explained the world without reference to gods.”

Evolution
Anaximander, as cited by Philip Ball (2011) and Bill Nye (2014), after studying fossils, argued that fish grew from warm mud, and that humans evolved from fish. [1]

Astronomy
The following, according to Henry Bray (1910), is a synopsis of Anaximander's views on the universe quotes: [2]

Education
Anaximander was the main pupil and successor of Thales; he is also cited as a student of Pythagoras, who was also a student of Thales.

Quotes | On
The following are about quotes:

“Anaximander, a pupil of Thales, said that a certain infinite nature is first principle of the things that exist. From it come the heavens and the worlds in them. It is eternal and ageless, and it contains all the worlds. He speaks of time, since generation and existence and destruction are determinate. Anaximander said that the infinite is principle and element of the things that exist, being the first to call it by the name of principle. In addition, there is an eternal motion in which the heavens come into being. The earth is aloft, not supported by anything but resting where it is because of its equal distance from everything. Its shape is rounded, circular, like a stone pillar. Of its surfaces, we stand on one while the other is opposite. The heavenly bodies come into being as a circle of fire, separated off from the fire in the world and enclosed by air. There are certain tubular channels or breathing-holes through which the heavenly bodies appear; hence eclipses occur when the breathing-holes are blocked, and the moon appears sometimes waxing and sometimes waning according to whether the channels are blocked or open. The circle of the sun is twenty-seven times greater than the earth and the circle of the moon is eighteen times greater. The sun is highest, the circles of the fixed stars lowest. Animals come into being from moisture evaporated by the sun. Humans originally resembled another type of animal, namely fish. Winds come into being when the finest vapors of air are separated off, collect together and move. Rain comes from vapor sent up by the things beneath the sun. Lightning occurs when wind breaks out and parts the clouds.”

“Anaximander, the son of Praxiades, was a native of Miletus. He laid down as his principle and element that which is unlimited without defining it as air or water or anything else. He held that the parts undergo change, but the whole is unchangeable; that the earth, which is of spherical shape, lies in the midst, occupying the place of a center; that the moon, shining with borrowed light, derives its illumination from the sun; further, that the sun is as large as the earth and consists of the purest fire. He was the first inventor of the gnomon (Ѻ) and set it up for a sundial in Lacedaemon, as is stated by Favorinus in his Miscellaneous History, in order to mark the solstices and the equinoxes; he also constructed clocks to tell the time. He was the first to draw on a map the outline of land and sea, and he constructed a globe as well.”

“Anaximander the Milesian, a disciple of Thales, first dared to draw the inhabited world on a tablet; after him Hecataeus the Milesian, a much-travelled man, made the map more accurate, so that it became a source of wonder.”

“Anaximander separated himself from Thales by regarding the abstract as of higher significance than the concrete: and in this tendency we see the origin of the Pythagorean or mathematical school. The speculations of Thales aimed at discovering the material constitution of the universe; they were founded, in some degree, upon an induction from observed facts, however imperfect that induction might be. The speculations of Anaximander were wholly deductive; and, as such, tended towards mathematics, the science of pure deduction.”

“Since the time of Schleiermacher the philosophy of Anaximander has received marked attention from historians of philosophy, and the literature on the subject has grown to large proportions. By many Anaximander is regarded as a metaphysician—as the first metaphysician. In this essay the attempt will be made to study the records, so far as they may conceivably be regarded as containing a metaphysical scheme, without express reference to other interpretations, although they have been conscientiously read and considered. The treatise of Anaximander was known to Aristotle and Theophrastus; there is no reason to think that it was studied by later writers for the purpose of ascertaining his opinions,' although Apollodorus may have inspected it with a view to determine his chronology. Theophrastus remarks upon its high-flown style,' which suggests that it was not discursive but, like that of Heraclitus, somewhat curt and aphoristic. We must therefore look to Aristotle and Theophrastus for a knowledge of the facts; but we shall be under the necessity of somehow checking their conclusions, the more since it is no longer a secret that Theophrastus was absolutely under the spell of his master, and that Aristotle himself, with all his speculative genius, or just because of it, was not always able to distinguish between that which his predecessors said and that which their words suggested to him.”

“Immortal and indestructible, surrounds all and directs all.”