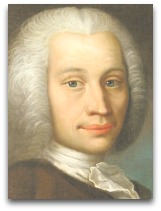 Overview
In 1741, Celsius obtained a thermometer from St. Petersburg and etched on the side opposite its scale a formulation: a boiling point of 0˚ and a freezing point of 100˚. Celsius had proposed the downward counting scale in attempts to avoid negative numbers, of boiling water (0) and melting ice (100).

In 1742, Celsius, in his “Observations of Two Persistent Degrees on a Thermometer”, published the findings of his scale.