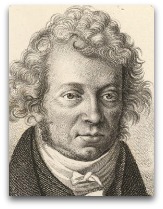 Overview
Ampere, as a youth, was manifestly brilliant: as a young boy he mastered advanced mathematics and taught himself science by memorizing the contents of learned encyclopedias, long passages of which he could recite years later. [5] As a child, he spent a great deal of time reading in the library of his family home, and he voraciously consumed books of history, geography, literature, philosophy and the natural sciences. His father taught him Latin and encouraged Ampere to pursue his passion for mathematics. Some historians write that the young Ampere was a math prodigy at a very early age and that he used to work out long mathematical formulas, just for his own personal entertainment, using small pebbles or breadcrumbs to represent groups of numbers. (Ѻ)

In 1793, Ampere, age 18, saw the execution of his father during the French Revolution, after which he was literally speechless for a year and in a prolonged state of deep depression; Ampere gave up his studies for 18-months following trauma (Ѻ); this was only compounded by the death of his young wife, five years into their marriage troubles with his two children, and unhappy second marriage, in what has been referred to as a “tortured life”. [5]

The 1795, Ampere, age 20, penned a series of letters to a man named “Couppier”, a supposed wealthy silk maker, reasoned to have resided in a chateau near the Ampere family, who asked many questions about mechanical contrivances; Ampere explained why perpetual motion was impossible, citing Joseph Lagrange’s work on analytical mechanics, Gottfried Leibniz on conservation of vis viva; he discussed Denis Diderot, Johannes Kepler; he show he was self-educated whose interests ranged from mathematics and astronomy; from botany to plans for a universal language and his translations of Horace. In one letter, Ampere wrote in a childish scrawl: ''You can see that the way in which I leap around is the way to get absolutely nothing done successfully. But as these ideas come to me I just simply have to pursue them.'' [5]

Electrodynamics
In 1820, Ampere, two weeks after Hans Orsted’s discovery that a current-carrying deflects a compass needle, observed that a coil of wire acts as a magnet when a current flows through it and that two such coils attract and repel each other, just as to magnets; that year he also published a paper wherein he precisely defined electric potential or electric pressure, as distinct from electric current. [7]

In 1822, Ampere had firmly established by experiment and quantitative analysis, the science of electrodynamics or the “electricity in motion”. [7]

Telegraph
In 1820, Ampere, in respect to the history of the invention of the telegraph (compare: Georges Le Sage, 1774), suggested that by using a circuit for each letter and a magnetic needle at the terminal end it would be possible to transmit messages.

In 1830, William Ritchie demonstrated Ampere's proposal on a small scale.

In 1836, William Cooke (1806-1879) and Charles Wheatstone used these principles to make an working telegraphy that ran one-mile along a railway in London.
Atomic theory
In 1814, Ampere developed a ‘geometric model’ in which he pictured atoms of chemical elements as being composed of subatomic particles. [1]

Electrodynamics
In circa 1820, Ampere dubbed the study of currents as “electrodynamics”. [4] In 1861, James Maxwell built on the work of Ampere to pen the fourth of his four Maxwell equations:

Cybernetics
In 1834, Ampere, in his Essay on the Philosophy of Science, coined the term “cynbernetique” (cybernetics). [2]

“The future science of government should be called ‘cybernetics’ (‘la cybernetique’).”

— Andre Ampere (1834), Essay on the philosophy of science; coined from (Ѻ) the French word meaning “the art of governing”, from the Greek kybernetes “navigator or steersman” ; adopted by Norbert Wiener for the field of control and communication theory

Quotes | On
The following are quotes on Ampere:

“The experimental investigations by which Ampere established the laws of mechanical action between electric currents is one of the most brilliant achievements in science. The whole, theory and experiment, seems as if it had leaped, full grown and full armed, from the brain of the ‘Newton of electricity’. It is perfect in form, and unassailable in accuracy, and it is summed up in a formula from which all the phenomena may be deduced, and which must always remain the cardinal formula of electro-dynamics.”

“It has been stated, on no less authority than that of the great Maxwell, that Ampère's law of force between a pair of current elements is the cardinal formula of electrodynamics. If so, should we not be always using it? Do we ever use it? Did Maxwell, in his treatise? Surely there is some mistake. I do not in the least mean to rob Ampère of the credit of being the father of electrodynamics; I would only transfer the name of cardinal formula to another due to him, expressing the mechanical force on an element of a conductor supporting current in any magnetic field; the vector product of current and induction. There is something real about it; it is not like his force between a pair of unclosed elements; it is fundamental; and, as everybody knows, it is in continual use, '' actually or virtually (through electromotive force) both by theoretical and practical men

Quotes | By
The following are noted Ampere quotes:

“My father never required me to study anything, but he knew how to inspire in me a great desire for knowledge. Before learning to read, my greatest pleasure was to listen to passages from Buffon’s natural history. I constantly requested him to read me the history of animals and birds.”

“Doubt is the greatest torment that a man suffers on earth.”