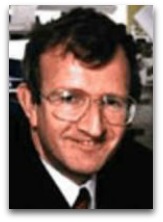 In existographies, Andrew McIntosh (c.1950-) (CR:6) is an English thermodynamics professor, noted in religious thermodynamics, as one who promotes young earth creationism, i.e. a creationist thermodynamicist, is an opponent of Darwinian evolution, and is noted for his 2000 book Genesis for Today, in which he argues that the Bible describes events literally as they occurred. [1]

In a debate with Richard Dawkins on BBC Radio Ulster, McIntosh stated his belief that the world was six-thousand-years old, that marine trilobites were made extinct by Noah's flood, and that the second law of thermodynamics contradicts the Darwinian theory of evolution. [2]

McIntosh was a reviewer for English materials scientist and pastor Edgar Andrews book Who Made God? Searching for a Theory of Everything, which devotes 15+ pages to thermodynamics discussion. [4]

Education
McIntosh completed his BS in applied mathematics at the University of Wales in 1973 and his PhD in 1981, with a thesis on “Unsteady Premixed Laminar Flames”, at the aerodynamics department of Cranfield Institute of Technology. [3]

“There is a fundamental law in the universe to which there is no known exception. That is, that when there is any work done due to energy conversion, there is always some dissipation of useful energy. In purely thermodynamic terms, this means that, for a closed system, the measure of energy no longer available for useful work is increasing. This is called entropy. Thus, in a closed system, the overall entropy is increasing. However, the law applies not only to the area of mechanics and engines. It applies to any system, since entropy is effectively a measure of the disorder in that system. In overall terms, disorder increases, cars rust and machines wear out. No spontaneous reversal of this process has ever been observed for a closed system. For living systems, this law still applies. That which is dead (such as a stick or leaf from a tree) has no information or teleonomy within it to convert the sun’s energy to useful work. Indeed, it will simply heat up and entropy will increase.”