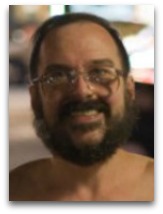 In hmolscience, Andrew William Morrow (1961-) is an American chemical engineer noted for his self-originated 2006 philosophy that people are ‘mosaics of atoms with a mind’ and that being aware of this atomic reality, one should attempt to see the reactions of one’s fellow human beings to oneself, so to see if further insight can be found. [1] Morrow's philosophy is centered around the connection between atoms, life, and mind; such as is captured in his 2009 video “We are Made of Atoms”:

“You are made of atoms and there is no escape from this knowledge. Peace and happiness but first you must be wiser.”

In which he speculates on how the internet is making the world more open and privacy less concealed.

Thermodynamic philosophy
In 2006, Morrow outlined an advanced intelligence perspective philosophy, using a mixture of atomic-logic and thermodynamics, on how to conduct one's self: [2]

“Start with atoms and thermodynamics and to slowly zoom back out to the millimeters-to-miles distance regime [as a Martian might see us on Earth] and examine the world in which [you] live with a fresh perspective based strictly on well-established, non-controversial scientific knowledge [and] use this information as a foundation upon which [to] decide how to spend the remainder of [your] lifetime.”

In this logic, Morrow states that his intention in publishing his views is for the reader to see the world through eyes unclouded by hate, fear, or other human emotion, so to observe our world, to evaluated our nature, our nurture, and our behavior, in such a manner that chemical reality based thermodynamic-perspective world-view will empower the reader and further probe the mystery of existence.

In this end, to to dig out a framework philosophy, Morrow states that he “will ignore the vast mathematical complexity of thermodynamics and focus on the philosophical implications of its ‘laws’.”

Sustainability
In 2010, Morrow began working on a sustainability population model, which he calls "perinatal lottery sterilization", as a way to use modern science to avoid Unsustainable World Population. He argues that some humans should be sterilized at infancy or even someday soon in utero as determined by lottery for the purposes of adult education and promotion of otherwise voluntary population stabilization.. He is in the process writing a book on a larger theme he calls Thermostat for Thermonuclear War, which he hosts at Thermo4Thermo.org. The work takes the approach of scientific materialism with an emphasis the triad of Atom, Life and Mind (ALM) and with some aspects of human thermodynamics. [3]

Education
Morrow completed his BS in chemical engineering in 1983 at the Rensselaer Polytechnic Institute, New York. [3] His occupation since has been as a computer engineer / computer programmer. One of his teachers was Hendrick Van Ness.