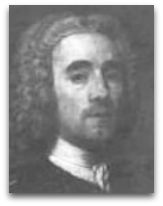 In affinity chemistry, Andrew Plummer (1697-1756) was a Scottish physician-chemist noted for his interpretation of chemical reactions as the result of competition between attractive and repulsive forces. [1]

“He knew chemistry well. Laborious, attentive and exact had not a native diffidence veil'd his talents as a praelector he would have been among the foremost in the pupils esteem: such was the gentleness of his nature, such his universal knowledge, that in any disputed point of science, the great Maclaurin always appealed to him, as to a living library; and yet so great his modesty that he spoke to young audiences upon a subject he was perfectly master of, not without hesitation.”

Oliver Goldsmith who attended some medical classes in Edinburgh wrote that:

“Plumer (sic) Professor of chymistry understands his busines (sic) well but delivers himself so ill that he is but little regarded.”

Education
Plummer attended the arts curriculum of the University of Edinburgh from 1712 to 1717 but did not graduate, graduation in arts having almost ceased early in the eighteenth century. Plummer matriculated in the University of Leyden on 5 Sep 1720, and the register of the University of Leyden for 1721 includes the names of Andrew Plummer, Andrew St. Clair and John Innes all of whom were elected professors of medicine at Edinburgh in 1726. Plummer graduated M.D. at Leyden on 23 July 1722. His graduation thesis, entitled 'de phthisi pulmonali a catarrho orto', was dedicated to John, Duke of Roxburgh. [2]

Plummer was a student of Dutch physician-chemist Herman Boerhaave.

Plummer was a professor of chemistry at the University of Edinburgh from 1726 to 1755.

Plummer came to be a close associate of William Cullen, the inventor of the affinity reaction diagram method, the precursor to the modern chemical reaction "reactants" going to "products" method of reaction notation, who eventually became his successor at Edinburgh. Cullen’s most-famous student was Joseph Black, who further carried forth the lecture ideas of the former two in his chemistry lectures at Edinburg in the 1770s and 1780s.

In some way or another, Cullen’s diagrams of an algebra of forces of affinity are said to have had their partial origin in the earlier ideas of Plummer. [3]

Cullen
William Cullen who had attended medical classes in Edinburgh in the mid-1730s but appears not to have attended Plummer's lectures was in 1747 appointed Lecturer in Chemistry in Glasgow and in 1751 Professor of Medicine. He soon began planning his next move that was to succeed Plummer in Edinburgh. For three years various friends of Cullen tried to persuade Plummer to resign but Plummer remained uncooperative. In 1755 he was stricken with an illness which it appeared would force him to abandon lecturing and now other candidates as well as Cullen pressed their claims. During the struggle Cullen was described by one of his supporters as "the fittest person in Europe to fill the Chemical Chair, and as the candidate who would be most acceptable to the Duke of Argyll". The matter was resolved after several months of in-fighting when the Duke of Argyll visited Edinburgh and brought to bear the influence which resulted in Cullen being appointed joint Professor of Chemistry during the life of Plummer, with the succession on his death. Plummer died on 16 April 1756 having, among other achievements firmly established the teaching of chemistry in the University of Edinburgh. [2]

Black
A number of Plummer's students made significant contributions to Chemistry. The most outstanding academically was Joseph Black part of whose classic research on alkaline substances was carried out while a student at Edinburgh; however while Black probably attended Plummer's lectures his interest in chemistry unquestionably arose from his earlier association with William Cullen in the University of Glasgow.