In existographies, Ani (c.1200-1250BC) was an Egyptian scribe, noted for his funding of his afterlife funeral spell rites document, aka the Papyrus of Ani (c.1250BC), discovered by Wallis Budge (1888), which is the most-complete version of the Egyptian Book of the Dead.

Other
Ani's wife, named "Tutu", is seen accompanying him in many of the vignettes of the Book of the Dead.

Osiris Ani
The goal of the deceased, like pharaohs before, is to be come "an Osiris" in the afterlife; the following, from plate 33 of the Papyrus of Ani, is a depiction of the "Osiris Ani", in this respect, i.e. Ani mummified like Osiris: 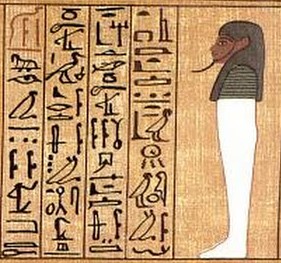