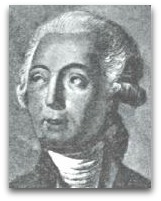 In existographies, Antoine Lavoisier (1743-1794) (IQ:180|#94) (Cattell 1000:393) [RGM:285|1,500+] (Murray 4000:5|CS / 1|C) (Gottlieb 1000:67) (Partington 50:5) (EPD:M5) (GCE:2) [CR:166] was French chemist, botanist, economist, and lawyer, noted for for his caloric theory, in which heat was hypothesized to be a fluid-like indestructible mass-less particle, called caloric, capable of causing expansion in bodies. This theory was developed in refutation of the older “phlogiston theory”, outlined in 1718 by German chemist Georg Stahl, in which heat was was hypothesized to be a fire-like element, having mass, called “phlogiston” that was contained within combustible bodies and released during combustion. [1]

Overview
Between 1768 and 1787, Lavoisier published over sixty papers leading to his theory of combustion. [3] His caloric theory of combustion found its way to the physicists of the world principally through the famous publication of this 1789 textbook Elements of Chemistry. [4] The heat-expansion work and theories of Dutch physician and chemist Herman Boerhaave, who previously in 1732 had written an influential chemist textbook titled Elements of Chemistry, were influential to Lavoisier.

Heat
Lavoisier was also key player in the early development of the science of thermochemistry, particularly for the 1782 construction and use of an ice-calorimeter, which together with French mathematician Pierre Laplace was used to determine the heat released in combustion reactions. He is also considered as one of the founders of modern chemistry, known for his experimental work on compounds, explanation of combustion, and help in devising a system of chemical nomenclature.

In 1783, Lavoisier, together with Pierre Laplace, in their Memoir on Heat, asserted the following propositions:

“The conservation of ‘free heat’, in the simple mixture of bodies, is thus independent of all hypotheses no the nature of heat.”

“If in a combination or in any change of state whatsoever there is a decrease of free heat, this heat reappears entirely when the substances return to their original state.”

“All variations in heat, real or apparent, which a system of bodies undergoes in changing state are reproduced in inverse order when the system returns to its first state.”

One of the first chemists to adopt Lavoisier’s theories was Scottish chemist Joseph Black who taught them as early as 1784. [2]

Elective affinity | Reactions
The force or energies or attractions and repulsions of “elective affinities” were for Lavoisier , as American historian Peter Reill summarizes, the “governing” factor for all reactions: [7]

“Elective affinities, in Lavoisier’s eyes, governed all chemical reactions, from the simplest to the most complex. For him, the physical universe was teeming with continuous combinations and reductions.”

The permutations for all such reactions, according to Lavoisier were based upon a minimum of three participants:

of varying intensities and proclivities. Lavoisier described his reaction model as follows: [7]

“[In any chemical equation] we must take into consideration the nature of the elements which enter into composition, the different affinities which the particles of these elements exert upon each other, and the affinity which the caloric possesses with them.”

Reaction energies
In 1782, Lavoisier discussed his views on the nature of the energies and forces involved in the dissolution of metals in acids, such as in the process of dissolving a metal in nitric acid. In commentary on the subject of “energies” of reaction, he states: [5]

“To know the energies of all these forces, to succeed in giving them numerical values, to calculate them, that is the goal which chemistry ought to propose to itself. Chemistry advances slowly, but it is not impossible that it may reach the goal. Meanwhile we are obliged to content ourselves with general considerations … I only hope that the reader of this memoir will apprehend the possibility of some day applying exact calculations to chemistry. But, before all, certain data must be obtained which will serve as a foundation, and it is to that subject I mean to devote myself.”

It was at least hundred-years before this goal began to be realized; specifically, with the development of the science of chemical thermodynamics, beginning in the 1870s, various physicists and chemists soon began to give insight into some of the numerical values of the types of energies involved in chemical reaction; such as: internal energy, entropy, enthalpy, free energy, activation energy, bond energy, etc.

Thermodynamics
In 1823, French physicist Sadi Carnot used Lavoisier's conception of caloric to outline a generalized theory of heat-engines, or of the production of motion by heat. In Carnot’s theory, the production of motion by heat was due to the need of bodies in contact to “re-establish equilibrium in the caloric”, such that the fall of the caloric from a hot body, through an intermediate substance, e.g. steam, to a colder body, thus causing expansion (and later contraction) in the “working substance”, was the drive or impelling power of the heat engine.

In the late 1840s, German physicist Rudolf Clausius became aware of Carnot’s theory, through the work of French physicist Émile Clapeyron and English physicist William Thomson, and set out to amend Carnot’s assumption that the condition of the body never changes with the newer logic of the theory of heat in which heat is considered as the energy related to the vibratory motion or kinetic movement of particles, along with the mechanical equivalent of heat, in which the production of work by heat and heat by work are proportional, and thus, subsequently, a portion of heat is consumed by the particles of the working body as they act on each other in a cycle in an irreversible manner. As such, according to Clausius, the condition of the working body does change, and this change shows itself as a consumption of heat in the constituency of the working body as particles act or work on each other in an irreversible manner.

To quantify this internal work, in an approximate manner, Clausius developed the model of "entropy", in which the intensive quantity of heat dQ, passing into or out of the system, is divided by the extensive measure of absolute temperature T at the surface of the working body, and this quantity, dQ/T, is then said to model the energy workings of the system particles as they act on each other, and was called by Clausius the "transformation-content" of the working body. This was the start of the science of thermodynamics.

Quotes | On
The following are noted quotes on Lavoisier:

“It took them only an instant to cut off that head, but it is unlikely that a hundred years will suffice to reproduce a similar one.”

— Joseph Lagrange (1794), comment made day after Lavoisier’s execution, May 9

“Although he lived only to the age of 51, Lavoisier revolutionized the field of chemistry. He created the first modern table of chemical elements [see: periodic table], recognized the role oxygen plays in the rusting of metals, demonstrated that water—previously considered one of the four fundamental elements—is a compound of hydrogen and oxygen, and asserted that the total weights of the products of a chemical reaction must equal the total weights of the reactants. Yet despite his remarkable importance to modern chemistry, Lavoisier's scientific work was more a hobby than a profession. In fact, because he made his living as a tax collector, his scientific work was relegated to early morning and after-dinner hours.”

Quotes | By
The following are noted quotes by Lavoisier:

“We must trust to nothing but fact: these are presented to us by nature, and cannot deceive. We ought, in every instance, to submit our reasoning to the test of experiment, and never to search for truth but by the natural road of experiment and observation.”

“When we begin the study of any science, we are in a situation, respecting that science, similar to that of children; and the course by which we have to advance is precisely the same which nature follows in the formation of their ideas. In a child, the idea is merely an effect produced by a sensation; and, in the same manner, in commencing the study of a physical science, we ought to form no idea but what is a necessary consequence, and immediate effect, of an experiment or observation.”

“We must trust nothing but facts: these are present to us by nature, and cannot deceive. We ought, in every instance, to submit our reasoning to the test of experiment, and never to search for truth but by the natural road of experiment and observation.”

“By the term ‘elements’, we mean to express those simple and indivisible atoms of which matter is composed, it is extremely probable we know nothing at all. about them; but, if we apply the term elements or principles of bodies, to express our idea of the last point which analysis is capable of reaching, we must admit, as elements, all the substances into which we are able to reduce bodies by decomposition.”